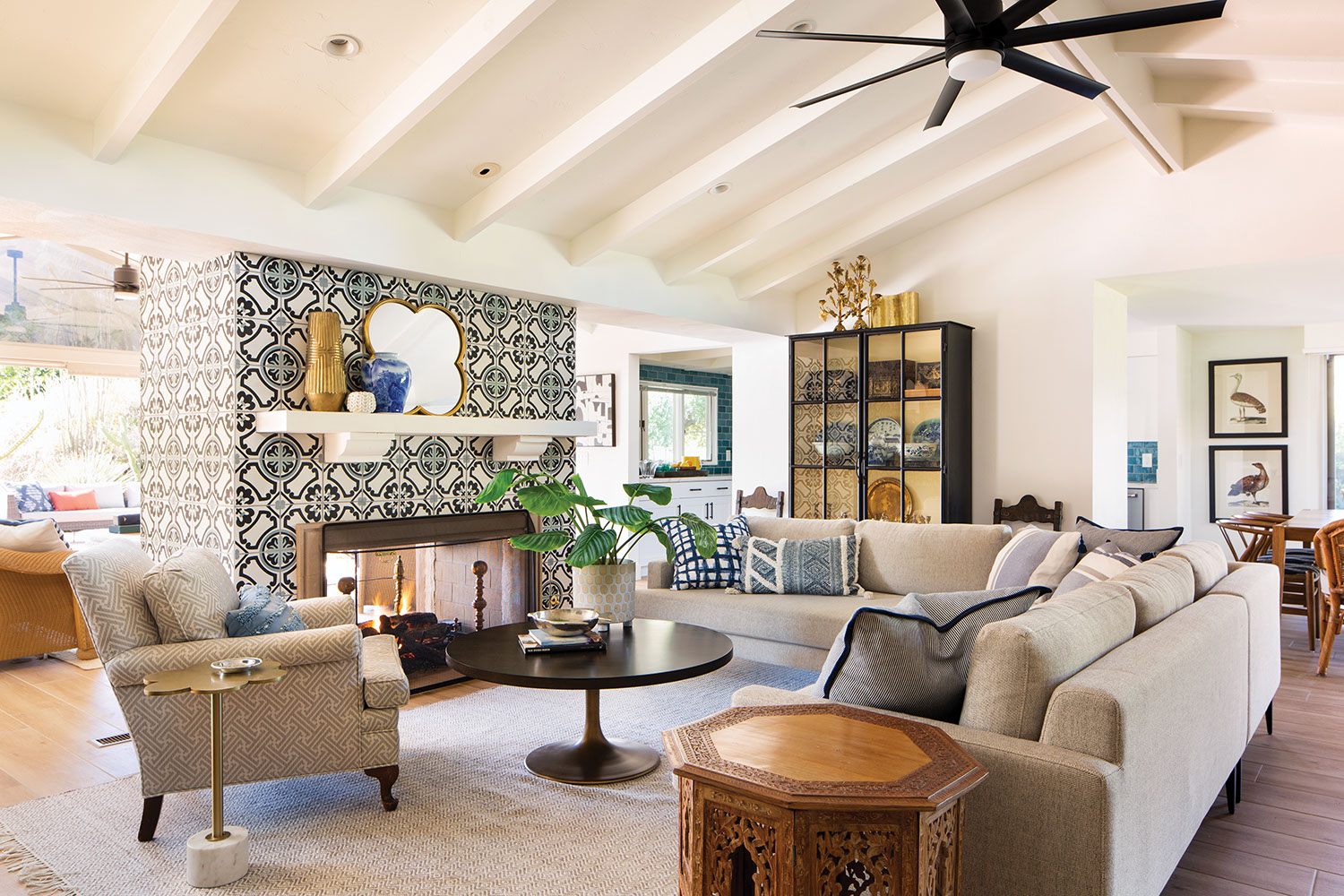 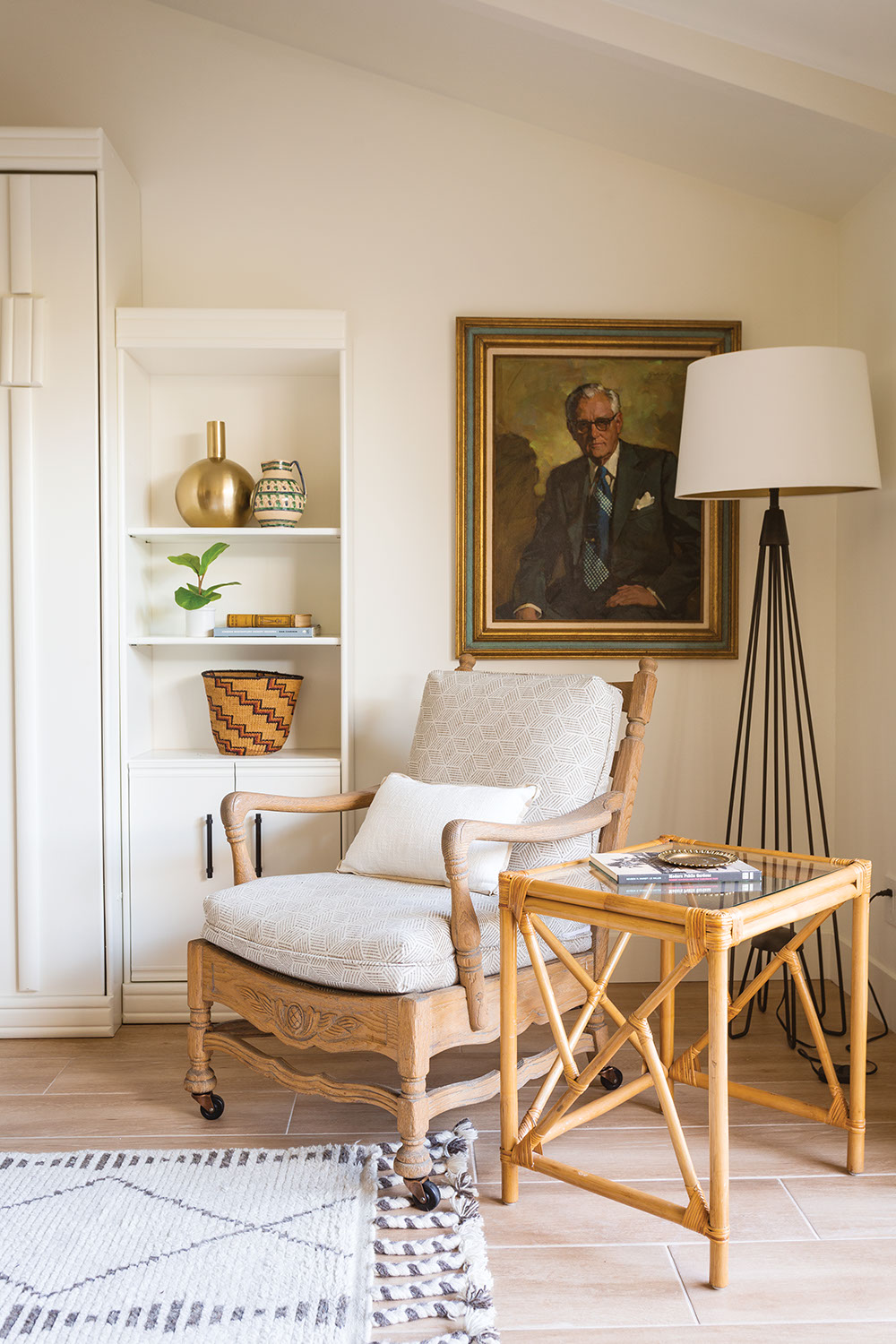 Call it the ultimate in upcycling.

In an era when emerging generations are saying ‘um, no thanks’ to mom’s vintage furniture and grandma’s china, Tara Verner pointed Sean in the opposite direction when updating her family’s Palm Springs vacation home. “Tara’s mother had recently passed away, so there was a lot of sentiment involved. She had me edit her mother’s estate, knowing that she wanted to retain a great deal to honor her parents,” he says. “So, it was my job to combine generations of furnishings into one cohesive modern style. The challenge was, how do I combine her mother’s Chinese porcelain collection and great-grandmother’s fainting couch into a kid-friendly vacation home with a casual modern vibe?”

In this redecorating puzzle, even the house itself was an inherited treasure—a second home that Tara’s parents had purchased several years ago after falling in love with the area through friends. The ’40s-era house is tucked into a storied Palm Springs enclave called Smoke Tree Ranch. The 400-acre community—complete with riding stables and a community pool and dining hall—was developed in the 1930s in part as a reaction to speculators from the coast who began to turn the desert town into a glitzy oasis of water-guzzling lawns and relocated palm trees. Even the community’s most famous homeowner, Walt Disney, caused an uncomfortable stir before he got the go to build his first Palm Springs vacation home there in 1948. Still today, the Ranch sits on dusty ground landscaped with only native plants, including the Smoke Tree shrubs that gave the neighborhood its name.

The most common way to find yourself with one of the coveted ranch houses these days is through a will. (Although you can rent cottages.) “You will never see a real estate sign here,” Sean says. “So, if someone wants to sell a house or had no one to pass it down to, you have to go through the Ranch and—how do I say it—see if you fit in.”

“It’s true that it is hard to get in here,” Tara says, “not because it’s ultra-expensive, but because it’s such a neat area that retains a kind of authenticity. People appreciate the history and tradition of the place, so families tend to stay from generation to generation.”

Part of that authenticity comes from the fact that the low-slung classic California ranches in the area are not razed and rebuilt to supersized proportions. Strict building covenants keep a lid on exterior changes. And thankfully so.

With its vaulted and raftered ceilings and wide-plank floors, this mid-century rustic house needed little in the way of renovation. For a more modern flow, Sean only opened up a couple of interior walls to, for instance, expose the kitchen to the dining room and bring the sunroom more fully into the layout. But surfaces and fabrics needed attention. “I would say it was tasteful grandma,” he says. “It was feeling very 1980s—chintz fabrics and pink tile, lots of soft sherbet shades. It was nicely done but dated.”

Surface rehabilitation started with gallons of white paint. “I lightened it up with white, white, white, white,” Sean says. “Then, I was inspired by Tara’s mother’s Chinese porcelain collection and thought the pretty blue could be a thread through the home.”

The kickoff for the scheme was the custom Mexican-made tile that Sean picked to turn a vanilla two-way plaster fireplace into a vivid eye-grabber. “It was a sell job to convince them this was the way to go,” Sean says. “They’re looking at the tile and how it would be going all the way around. I know it was hard to wrap their heads around it. I said, Trust me. Trust me. Trust me. They did, and now I think it’s their favorite element.”

Tara confirms his assessment. “I did think, Whoa, that’s going to be bold,” she says. “But he was right, of course. It is our favorite part of the whole place. Those tiles are both traditional old-Spanish style but also contemporary in feeling.”

Building trust with a client is a first order of business for Sean. For one, it can avoid the uneven results of a compromised design vision. For another, the lack of it slows the redecorating timeline to a crawl. “I always say that if you get involved with choosing every lampshade and doorknob, we’ll never make a deadline. It always works better to say to them, Here’s the vision. Here’s the big pieces. I’ll see you later.”

In this case, the timeline was definitely tight. “The family came to have their final Thanksgiving dinner in the ‘old house,’” Sean says. “When they came back at Easter it was 100 percent done, down to the bed linens and everything in place inside new kitchen cupboards. We did a big reveal and it was so much fun. There wasn’t a dry eye in the place for sure.”

The family walked into rooms that beautifully bridged any generational style gap. Grandpa’s favorite fireside chair and great-grandma’s fainting couch wore snappy new threads in subtle geometric patterns. A treasured gilded Asian screen had a starring role on the living room wall, made more modern with the addition of a sleek bench below it. The brass planter nearby is Tara’s grandmother’s. “That artwork was an important one to Tara, even though she worried how it might fit into the new design. But I gave it space to shine, a place of honor,” Sean says. “I think this grouping really sums up what this house is all about. It represents her grandmother and mother, and the new generation adding to the mix.”

“Anybody can go to a showroom or a home store and buy a look. But it’s a generic look. When you’re able to mix eras, it becomes a home. It’s fresh. It’s unique. It has history. It tells a story.”

Though this multigenerational mix looks effortless, it’s not an easy thing to pull off. Sean, who honed his design skills at fashion and home retailers like the Gap and Restoration Hardware before opening his own company, is a master of the decorating mashup. But explaining how he pulls off the tightrope act is tough even for him. “It’s hard to put into words, I think,” Sean says. “But I think you should judge a piece by whether it can stand alone as a good design. Then, if you bring pieces together that have a common thread of color, style, or form they create a cohesive look where each piece plays off the other.”

A few cases in point: A mantel grouping that includes an antique porcelain urn and, living beside it, a modern pottery vessel. Or a new dining room table flanked by modern wishbone chairs but with classic McGuire wicker presiding over things at either end. Nearby, a modern curio cabinet houses Tara’s favorite pieces—all in view but guarded by glass so that her three daughters can one day decide how they might work into their own schemes.

And that, for Sean, is the beauty of it all. “So many of the items that are handed down end up in a garage or the rafters or, unfortunately, the landfill,” he says. “But if you put fresh eyes on it, maybe update it with color or a new fabric or a new setting, you give it a new life. It’s a rebirth of sorts. And now it’s so fun to see these three young girls lounging all over the chair their grandpa once loved to sit in.”

Tara loves it, too, paying Sean what was to him the ultimate compliment: “My mother would be so proud of what you’ve done.”

Even more, she likes the lesson that design can bridge generations. “Our kids loved the process. Now, they have an appreciation for having a nod to the past and seeing how it can be modern and relevant,” Tara says. “I became aware, too, that not only are you honoring your ancestors, but it’s so much better for the environment. I realized I don’t want cheap furniture that doesn’t hold up when there are so many pieces—in your family or maybe at an auction house—that are amazing when you give them a second look.” 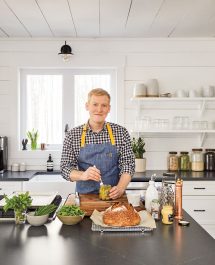 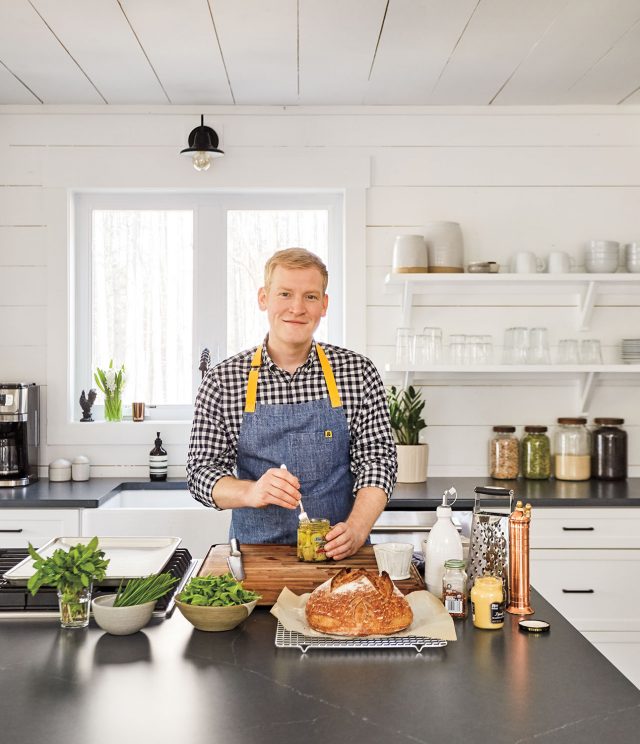