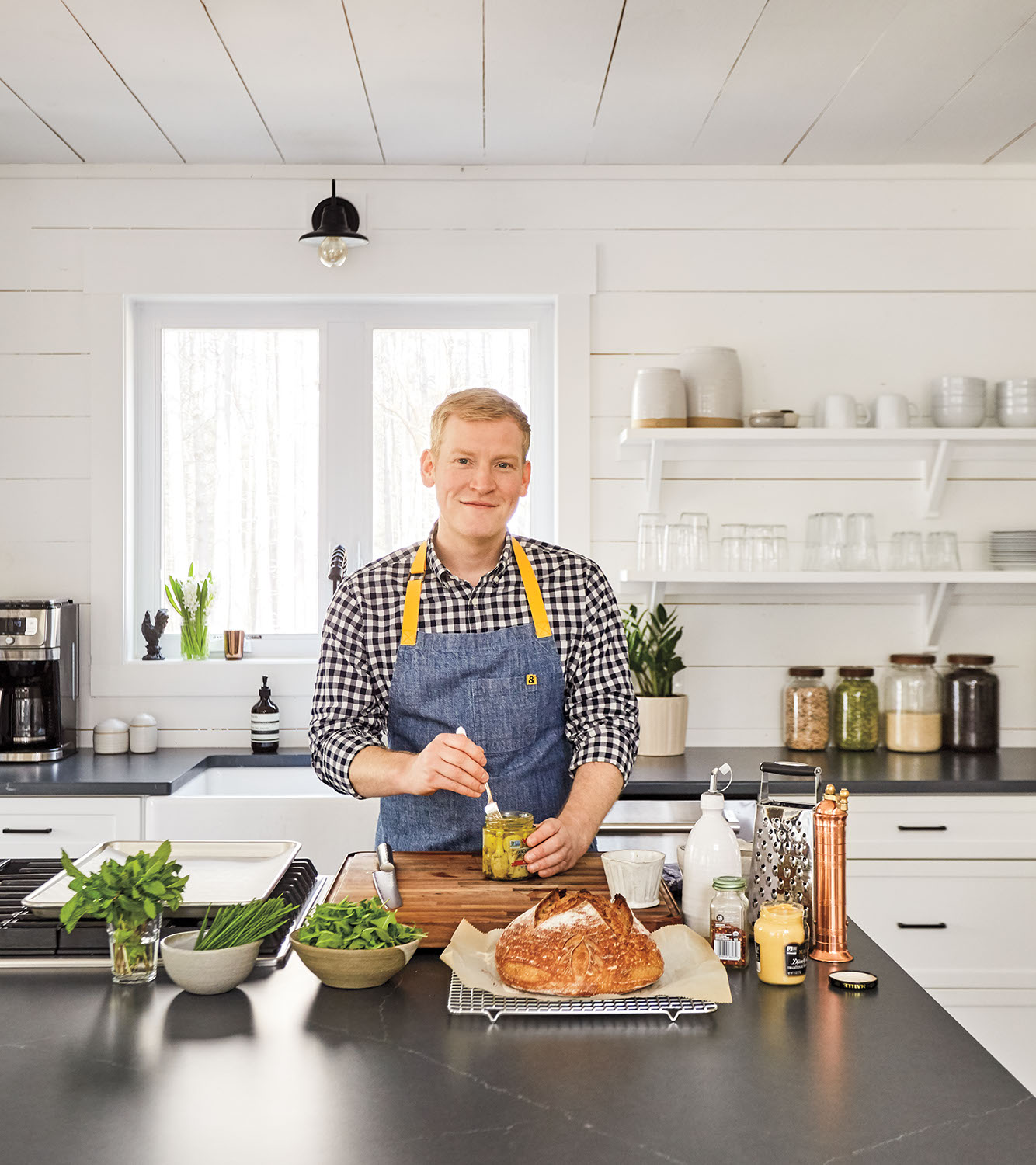 Justin Chapple is living his dream. Actually, make that living his three dreams. “When I was a kid, I wanted to be two things. I wanted to be a teacher or an actor,” he says. “And then as I got older, I realized I wanted to become a chef. And now, in what I do every day, it almost feels like I’m doing all three of those things.”

The apparently preordained path started in his grandma’s kitchen. “I cooked with my grandma quite a bit,” he says. “We were obsessed with watching Jacques Pepin, Martin Yan, and Two Fat Ladies. Then we would cook together and sort of explore. But we didn’t have a lot of money growing up, so my grandmother oftentimes came up with little tricks. And it’s funny because as an adult and professional cook, I think I cook the way I do because I have this classical training, but I paired that with the way we cooked when I was a kid and landed on my type of cooking. It’s not a new type of cooking, but it’s my type of cooking.”

The classical training began when he was working retail in his early twenties and wanting more. Given his “obsession with cooking,” he made a logical transition. He left his hometown of Stockton, California, and attended the French Culinary Institute in New York City (which later became the International Culinary Center and has recently been folded into the Institute of Culinary Education). There, he was trained as a chef specializing in French cuisine. He then headed into restaurant kitchens as a line cook and put that knowledge into action.

Along the way, he began developing simplified recipes tailored for the home cook who is short on experience, time, or confidence. “So many of the tips and tricks I use in my cooking I either learned at school or by cooking in fine restaurants,” Justin says. “It’s funny that so many people think cooking professionally has to be tedious and difficult, but it’s really chefs and professional cooks that come up with the most genius ways of doing things easier and faster in the kitchen.”

Justin found his niche when he began sharing those pro tips with home cooks in videos he stars in as Food & Wine magazine’s Culinary Director-at-Large, a series for which he was nominated for two coveted James Beard Awards. The series and his first book are titled Mad Genius Tips, and they both propelled the personable cook onto the national stage as a guest on talk shows and Food Network cooking shows.

He’s become well known for “trimming a ridiculously long ingredients list” from chef-developed recipes and coming up with countless shortcuts for complex classic dishes, from beef bourguignon to Caesar salad. And then there are those fabulous hacks, such as one of his favorites—shredding frozen butter into a pastry recipe instead of laboriously cutting the butter with flour. Boom!

Despite his genius tips, Justin insists he’s just a humble helper who wants everyone to enjoy cooking and feeding folks as much as he does. “What I’ve done is basically make recipes approachable for people,” he says. “They don’t have to be gimmicky or boring. The idea is you can make really simple food really delicious.”

Peeking in the Pantry

“It’s obvious I love pickled and fermented ingredients—they’re so healthy and tasty—but then of course there are ingredients in the pantry I love to keep on hand because they just add so much flavor to dishes, like curry or miso paste.”

“Find a high-quality marinara—my favorite is Rao’s Homemade Marinara Sauce. This is a really, really tasty marinara sauce that I use often. I use it to make speedy recipes that have a slow-cooked flavor because it’s packed with high-quality tomatoes, onions, spices, and extra virgin olive oil. It’s the perfect shortcut for all types of recipes. Tonight, I’m using it as a base for my favorite collard-green stew.”

“I know this is a weird one, but this is a more flexible base than you think.  For instance, I puree the beets with either yogurt or sour cream and you get  this silky Technicolor dip that is so good with vegetables. They add tons and tons of flavor with little effort.”

“This is one of my favorite ingredients because the artichokes are cooked and have tons of spices and aromatics. You can incorporate them into dishes with very little effort because you get a big payoff thanks to the marinade—plus you’re getting a vegetable that’s been prepared for you.”

Three years ago, Justin built this home along with his husband, Jason Sarnoff. Here’s how they made it the perfect place for cooking and entertaining.

“I have 10 burners—a workhorse range against the wall and a cooktop inset into a large island. It’s off-center so there’s plenty of space on one side to work. Maybe I don’t need all 10 but it lets me to shoot video—and face my guests.”

“Sure, they need to be sort of curated—and dusted. But it’s worth it to me because it forces me not to collect anything and everything and tuck it away in a cupboard. It’s like a clothes closet where you always grab the same pair of pants because they’re right there and everything else is lost.”

“I went for a quartz countertop because it’s so much easier to take care of. I used to have marble, and although I love the way marble looks, it’s a nightmare to maintain. I chose a quartz that looks like soapstone, with a matte finish that is less reflective. You can also have quartz cut in big sections to avoid seams for a great look.”

Note: Get the look with Wilsonart’s “Enchanted Rock.”

“I designed the space with mostly drawers and convenient pull-outs for all my pots and pans and all of that. I actually have a drawer that’s dedicated to reusable storage containers, which is maybe my favorite element.”

“Like many people, I wanted a big open floor plan that allowed me to cook and prep and even clean all while interacting with other people. And that’s true whether it’s just my husband and me at home on a weeknight, or if I’m entertaining.”

Drain the artichoke hearts in a sieve set over a medium bowl; reserve the brine.

In a large skillet on medium-high heat, melt the butter in ¼ cup of the reserved brine.

Add the shallot and garlic and cook, stirring, until softened and very fragrant, 1 to 2 minutes.

Add the shrimp, tomatoes, and artichoke hearts and season with salt and pepper. Cook, stirring occasionally, until the shrimp are just cooked through and the tomatoes are just starting to burst, about 7 minutes.

Stir in the capers and season with salt and pepper. Fold in the basil and chives and serve.

Position the oven rack 8 inches from the heat source, then preheat the broiler to high. Brush both sides of the bread slices with olive oil and arrange them on a large rimmed baking sheet. Toast the bread under the broiler, turning a few times, until browned and crisp, 3 to 5 minutes total. Rub the toasts on both sides with the garlic clove.

Mound the arugula evenly on the toasts. Top each one with ¼ cup of cheese and one fourth of the marinated artichokes hearts. Evenly sprinkle the remaining cheese over the toasts and season lightly with salt and pepper.

Broil the tartines until the cheese is melted and the tops are lightly browned, about 3 minutes. Transfer to a serving platter and drizzle them lightly with some of the artichoke brine (reserve the remaining brine for later use).

Sprinkle the tartines with chives and crushed red pepper; serve.

Bring a large saucepan of water to a boil, then add a generous amount of salt. Add the fregola and cook until al dente, 10 to 12 minutes. Drain well and spread on a baking sheet to cool.

In a serving bowl, whisk the olive oil with the olive brine, vinegar, Dijon mustard, and crushed red pepper. Season the dressing with salt and pepper.

In the same bowl, add the fregola, arugula, olives, cherries, and scallions; mix well. Season the salad with salt and pepper and toss again. Top with toasted almonds and serve, passing shaved cheese at the table.