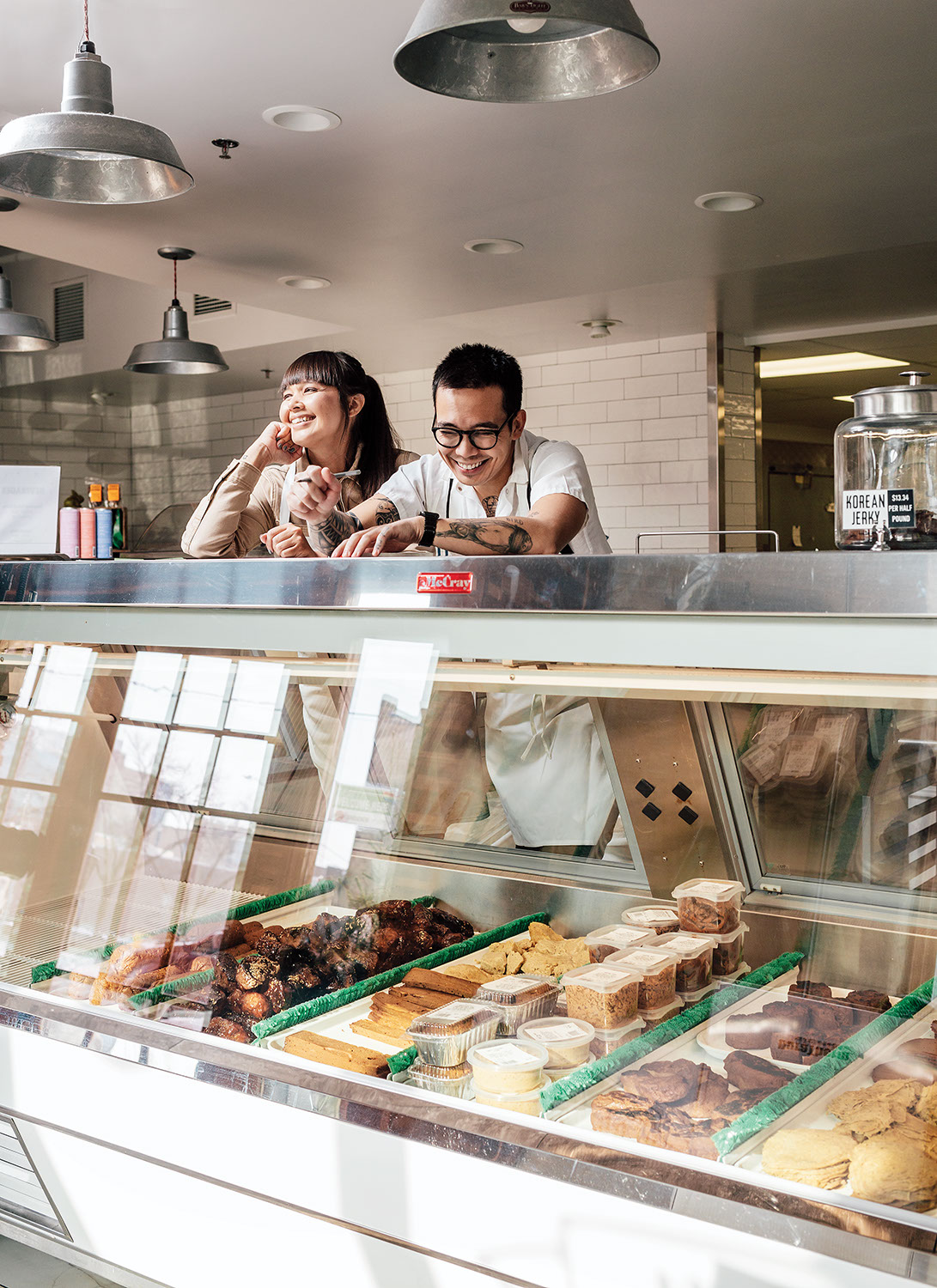 It’s a classic scene you’ve likely witnessed time and time again. You walk into a deli and there’s the butcher, clad in a white apron, ready to take your order from behind a glass case filled with lunchmeats, steaks, and cheeses. Everything looks exactly like this in Minneapolis’ The Herbivorous Butcher, except for one not-so-tiny detail: every meat is vegan. Every last one of them, from the Korean BBQ Ribs to the Maple Glazed Bacon.

In the land of meat raffles and dairy farms, it may come as a surprise that the first vegan butcher shop in the United States is situated in the Midwest. And its beginnings go even farther than that, to Guam, a place that also loves its meat products.

Co-founders and brother and sister, 26-year-old Kale and 38-year-old Aubry Walch, have had a storied past paved with food long before they opened The Herbivorous Butcher in 2015. Before moving to Bloomington, Minnesota in 1994, a teenage Aubry and a six-month-old Kale had only known a meat-centered culture in their native Guam.

“Guam’s food culture is very meat-heavy,” Aubry says. “I grew up eating meat with nearly every meal. Every Sunday, we had a family barbeque at my grandma’s place where there was always grilled ribs, chicken, steak, and even hot dogs.”

Shortly after moving to the United States, a then 14-year-old Aubry took a job as a grocery store bagger, where she became disturbed at having to double-bag meats so they wouldn’t leak onto other foods. “It was from that moment on,” she says, “that I made the decision to end my co-dependent relationship with animal products and I went vegan.” She solidified her choice by reading books about animal rights and the environment.

Kale eventually went vegan as well. “I have been vegan for eight years,” he says. “I really just wanted to lose some weight before I started college to try to avoid the ‘funny fat kid’ trope that I felt I filled in high school. As soon as I went vegan, and soon before, my sister peppered me with documentaries and articles telling me why I should keep being vegan, and it stuck.”

The two had varied careers before opening The Herbivorous Butcher: Kale went to school to become a pastor (an idea that “crashed and burned” as he says) and later became a server. Aubry worked at Whole Foods, then took a turn as a music booking agent and office manager at a fine arts company.

One night during a 2013 dinner, the first flickers of The Herbivorous Butcher began to form.

“Kale was about 20-years-old and had been vegan for a few years, making his own version of vegan meats at home,” Aubry explains. “I asked him if he wanted to open a vegan butcher shop—half-kidding of course—and without any questions he said ‘yes,’ and we were off.”

Their goal? To take on the societal norms of a butcher shop, flip them, and then reverse them. And to do it in the Midwest. “When we first started, we were a little scared that we wouldn’t succeed in the meat and potato-centric Twin Cities,” Kale says. “But we quickly realized we were wrong.”

“When someone becomes vegan, the planet immediately breathes a little bit easier—literally!”

And boy, were they ever wrong. Over the past five years, their plant-based products have formed a cult-like following. “We found there was a huge market for plant-based food in the Twin Cities, and moreover, a booming small-business scene,” Kale says.

Aubry echoes her brother’s sentiment. “The greatest surprise of all for me was seeing that our concept of a vegan butcher shop was something that people wanted!”she says. “When you’re so passionate about a cause and the movement, it’s hard to see the forest for the trees. We were so ingrained in every single little thing as we were opening the store that I was so nervous that the public wouldn’t get behind our mission. I was so wrong.”

Today, vegetarians, vegans, and even omnivores clamor for their delicacies. “The biggest challenge is to get people over the initial hurdle of just trying the product,” Kale says. “But after we bridge that gap, it’s easy.” In fact, they’ve successfully purveyed their eats at the local farmer’s market. They’ve had a food truck for three seasons. They even ship their creations to all 50 states and Puerto Rico.

The fruits of their time, research, and labor manifest as some of the tastiest meat-free fare around. Many of the meats are made with vital wheat gluten, a high-protein flour that’s “very versatile,” as Kale says. The deli also offers gluten-free options. From hearty provisions like shredded chicken, breakfast sausage, and chorizo to creamy vegan cheeses including camembert, chive cheddar, and feta, the realistic foods continually shock patrons.

Kale and Aubry have carried their passion to a new venture: a farm sanctuary called Herbivorous Acres. “At The Herbivorous Butcher, we have three main pillars that drive us to do what we do every day: animal rights, human health, and the environment,” Aubry says. “Herbivorous Acres was our first move into practicing our pillars.”

The Scandia, Minnesota farm sanctuary is currently home to four goats, four ducks, two pigs, two roosters, and rescued farm cats.  “We’re hoping to expand our animal family and be able to open our doors for volunteers and visitors in the next year,” Aubry says.

The Herbivorous Butcher is more than a place to pick up a tasty lunch; Aubry and Kale are clearly on a mission, one that’s been successfully carried out every day since it opening. “When someone becomes vegan,” Kale says, “the planet immediately breathes a little bit easier—literally! Deforestation and carbon emissions from the meat and dairy industry aren’t doing the planet a lot of favors, so every day someone eats a vegan diet, it literally affects the planet and contributes to a better future for us all.”

This recipe, courtesy of The Herbivorous Butcher, is a vegan spin on a classic Chinese dish, except this version features hearty helpings of seitan and a mouth-watering sauce.

Bring simmering broth to a boil in a large pot over high heat.

Mix dry ingredients together in a large bowl.

Mix dry and wet ingredients in a standing mixer fitted with a dough hook until dough binds together and no powder is visible (if no mixer is available, just knead aggressively for a few minutes, folding the seitan over itself).

Divide into several large chunks and wrap in cheesecloth, tying the ends like a piece of taffy.

Simmer in broth for 2 hours. Do not allow the seitan to boil, as it will create a spongy texture.

Drain and allow to cool slightly.

Press overnight in the refrigerator and unwrap in the morning. Break up into organic-shaped chunks and store in an airtight container.

Heat a saucepan over high heat and add the vegetable oil, swirling to coat.

Add the soy sauce mixture and bring to a boil, then reduce heat to medium and cook for a minute.

Combine the cornstarch and cold water, stirring until smooth, then slowly add to the sauce, whisking until the sauce boils and thickens. 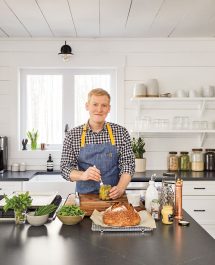 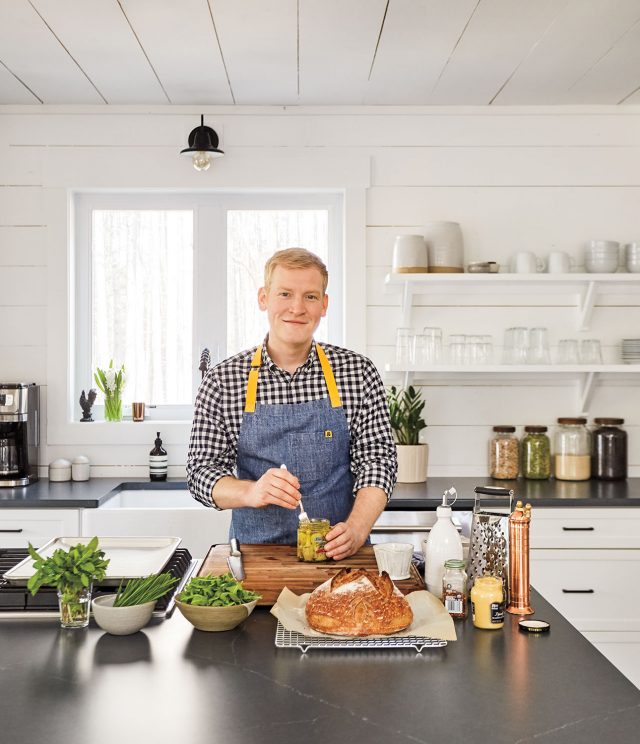