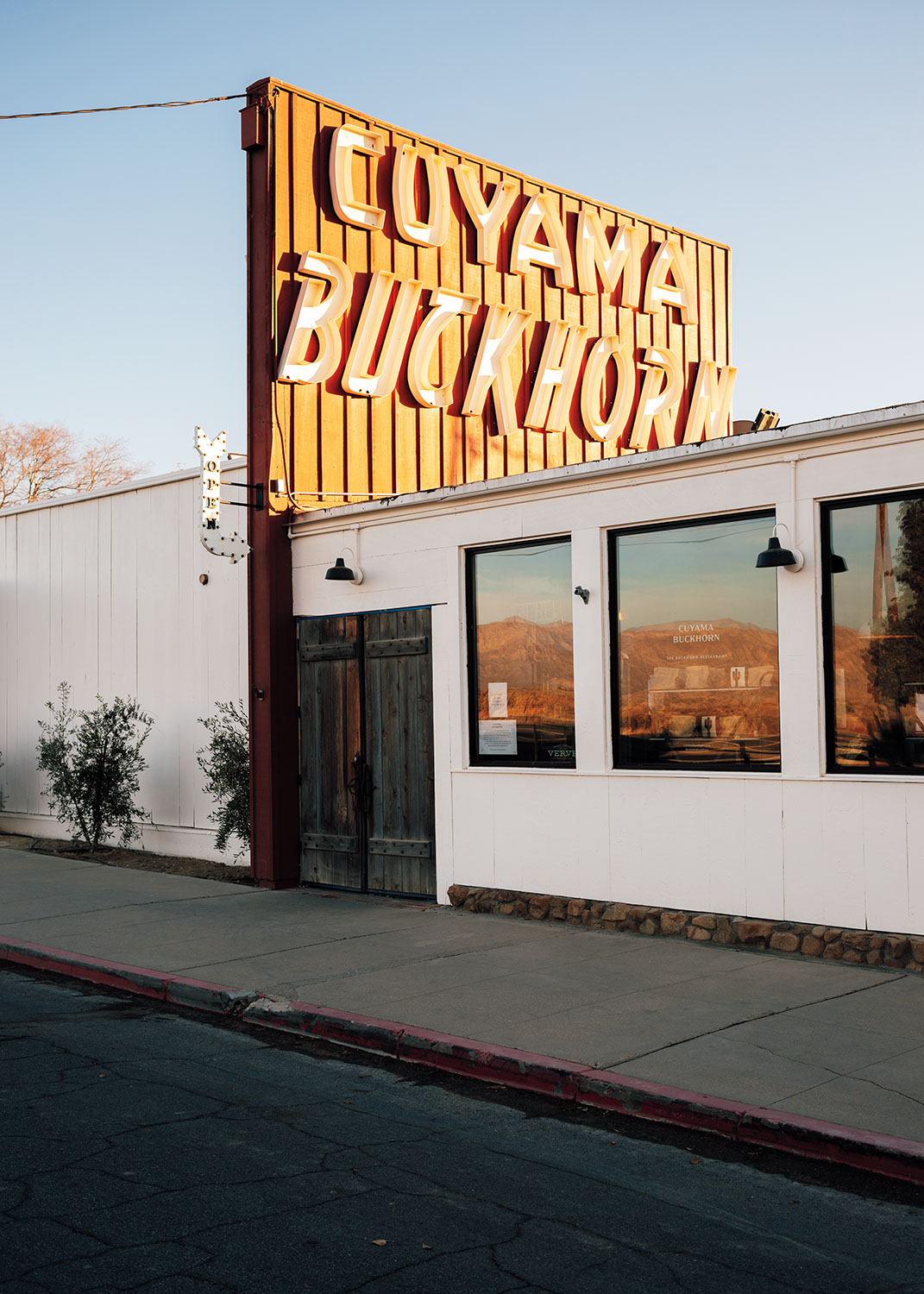 The first thing Jeff Vance did, when he and partner Ferial Sadeghian took the reins of the historic Cuyama Buckhorn, was clamor up to its roof and start stripping off a veneer of corrugated metal that would (thankfully) reveal the original marquee sign. “I was just hellbent on making sure that thing came down,” Jeff says. “The previous owners were going after a biker bar look, a roadside hangout. We wanted to return it to what it was.”

The two kept peeling, finding their way back to the structure’s midcentury-modern core—albeit one with a kick of cowboy. When the hotel was built in 1952, it was part of a planned community developed by the Atlanta Richfield Oil (ARCO) company, which had tapped into oil reserves in the high desert plains of Central California’s Cuyama Valley. At that time, it was country mostly parceled into vast ranches amid the wide-open native grasslands and pristine forests hemmed in by the Sierra Madre Mountains and Caliente Range.

New Cuyama was a company town for its workers, and the Cuyama Buckhorn, with its restaurant, bar, meeting facilities, and 21 guest rooms, was a social hub and a place for execs and passersby to hang the ole hat for the night—whether fedora or a wide-brimmed style.

Flush with oil dollars, the company hired noted architect George Vernon Russell, who had designed the iconic Flamingo Hotel in Las Vegas, to design the Buckhorn. “The fortunate thing is nobody really removed anything, or demoed anything, or changed anything structural, they just sort of covered it up with icing,” Jeff says. “We just had to scrape it back to the original building, which is super high-quality.”

It was a dream project for Ferial and Jeff, both designers themselves in the iDGroup, a design-build firm founded and owned by Jeff (Ferial is CEO) that has overseen stunning residential and commercial projects from L.A. to Tokyo.

But this was a project of the heart.

For Ferial, a well-traveled Iranian-born daughter of two diplomats, it was a chance to recreate the feeling of the unpretentious, culinary hotels found in the European countryside, where you immerse in a lifestyle—and likely a 10-course meal created with ingredients from the garden out back and the vineyard down the road. The Buckhorn was in position to do that, literally. It sits on Highway 166, a scenic passage that now cuts through the farms and wineries that sprouted in the area when the oil reserves tapped out.

For Jeff, it was an opportunity to be part of a landscape that he has explored for years. As a kid, he stayed at a ranch owned by the family of a little league buddy. As an adult, he returned to the area often “on two wheels or four,” he says. “I’m an explorer by nature—and really of nature—the further out the better. The best part is discovering a little destination there, a diner or coffee shop where I’d find my corner booth and hang out or work or just sit there.”

For both of them, it was a chance to develop a project that offered folks a way to experience an authentic California. “Two hours away from West Hollywood, you could be sitting with a guy that hasn’t been to L.A. in 20 years,” Jeff says. “These are true cowboys. It’s the real deal. To us, it’s amazing that it actually still exists.”

In the two years since the metamorphosis began, the Cuyama Buckhorn has emerged a true destination resort that encapsulates and celebrates its surroundings. Renovated rooms are serene and well-appointed, toggling between midcentury retro and modern ranch. An open-air courtyard blazes with a firepit in the evening, drawing guests to relax under the starry sky of the high desert and roast marshmallows (visitors get a s’mores kit upon check-in) or take in a movie on the outdoor screen. A new heated pool is now part of the oasis.

The restaurant still serves classic roadside fare—like a Santa Maria tri-tip steak cooked on a red oak grill that is original to the inn—along with elevated, thoughtfully crafted seasonal menus that pull from the local bounty and the property’s gardens. Ferial leads the farm outreach and stays plugged into the local food scene, always with an eye toward supporting small, sustainable operations. “Every single day I’m learning,” she says, “especially more about the value of the ingredient, understanding regenerative farming, and why all of these things matter to our environment, economy, and good health.”

Although the pandemic has slowed the rollout of many creative programs the two have up their sleeves—from visiting chefs to live music to a “Wayfinding” directory of the natural wonders of the Cuyama Valley—the idea is to make the Buckhorn the social refuge for the area. “We realized Cuyama Buckhorn has a bigger impact than we expected, and we can truly bring the community together—the locals, passersby, neighboring towns, and hotel guests,” Ferial says.

Their partnerships with neighboring ranches, farms, and wineries, as well as involvement with local groups such as the Blue Sky Center that aims to spur economic growth in the area, have made them standout residents—if not local heroes—in this town of about 700 people. But they insist they’ve gotten far more than they’ve given. “The relationships are something that we didn’t expect,” Ferial says. “It’s like we’ve become a part of a larger family. One nice thing that we constantly get from everyone is, ‘Thanks for being here,’ which kind of says it all.”

It was a sentiment that started the moment Jeff tore the metal from the sign. “We got a lot of feedback from the town immediately as they noticed we were going in a different direction,” he says. “I had a lot of people just stop by to meet us. They were quite happy to see it go back to the way it had always been. It was a literal sign that we weren’t going to be a biker bar—at least not that kind of a biker bar.”

Salt and Pepper, to taste

While preparing the vegetables, cover the potatoes in water and cook until soft.

Sauté each type vegetable separately so they retain their individual colors.

Once vegetables cool, combine them with vegetable stock and season to taste.

Drain cooked potatoes. Whip potatoes with butter and cream using a mixer with a whisk attachment until it’s a smooth puree. Season to taste.

Bake at 400°F, until potatoes are golden brown on top.

Steep one cup of loose Rooibos tea at room temperature in a container with 1 liter of vodka for one hour.

Strain out the tea leaves.

Note: You can use any tea of your choice; we chose the rooibos tea because it’s herbal and noncaffeinated.

TO MAKE THE PORCH SWING COCKTAIL

Shake first four ingredients together and pour over ice in a tall glass.

Garnish with a mint sprig and lemon wedge.

1 pound apricots, halved and seed removed (we use Cuyama apricots)

Combine all ingredients in a pot over a low flame; let simmer until apricots begin to caramelize. Note: If syrup is too sweet add a little extra vinegar.

Whisk all ingredients together until stiff peaks form.

Put the butter in a large, ovenproof, nonstick sauté pan and place in the oven.

Meanwhile, in a blender, combine the eggs, flour, warm milk, sugar, vanilla extract, and salt, and blend on medium-high speed until uniform.

Carefully remove the hot pan from the oven. The butter should be melted. Swirl the butter around the pan to coat completely.

Cook until the pancake is puffed in the center and golden brown along the edges, 20 to 25 minutes.

Using a spatula, remove the entire pancake from the pan and place on a cooling rack for a few minutes to allow the steam to escape. The rack prevents the pancake from condensing along the bottom, rendering it soggy.

Slice the pancake into 8 wedges on a serving platter or cutting board. Serve with Chutney and Crème.

In a large mixing bowl, cream the butter, sugar, and salt.

Combine all dry ingredients and add to the mixing bowl.

Pour mixture into a 10-inch cast iron skillet. Bake at 350°F for 30 minutes, give or take. Test for doneness as you would a cake: Insert a wooden toothpick; if it comes out clean it’s ready.

How to get there:

The Cuyama Buckhorn sits on historic Hwy 166, between Bakersfield and Santa Maria. For a scenic route, jump on Hwy 33 from Ojai. It’s an easy drive from Santa Barbara or L.A. Fly into those cities or, if you’re a private jetsetter, land at New Cuyama’s privately owned airport.

The most colorful time is April when a massive carpet of wildflowers blooms on the Carrizo Plain National Monument. Through the year, hit the hiking trails at Los Padres National Forest or birdwatch at Bitter Creek Wildlife Preserve, habitat for the endangered California Condor.

You can book a room at the Cuyama Buckhorn and learn more about their current happenings by clicking over to cuyamabuckhorn.com or by calling 661-766-2825. For a more rustic experience, rent a hut at the nearby Blue Sky Center, blueskycenter.org.