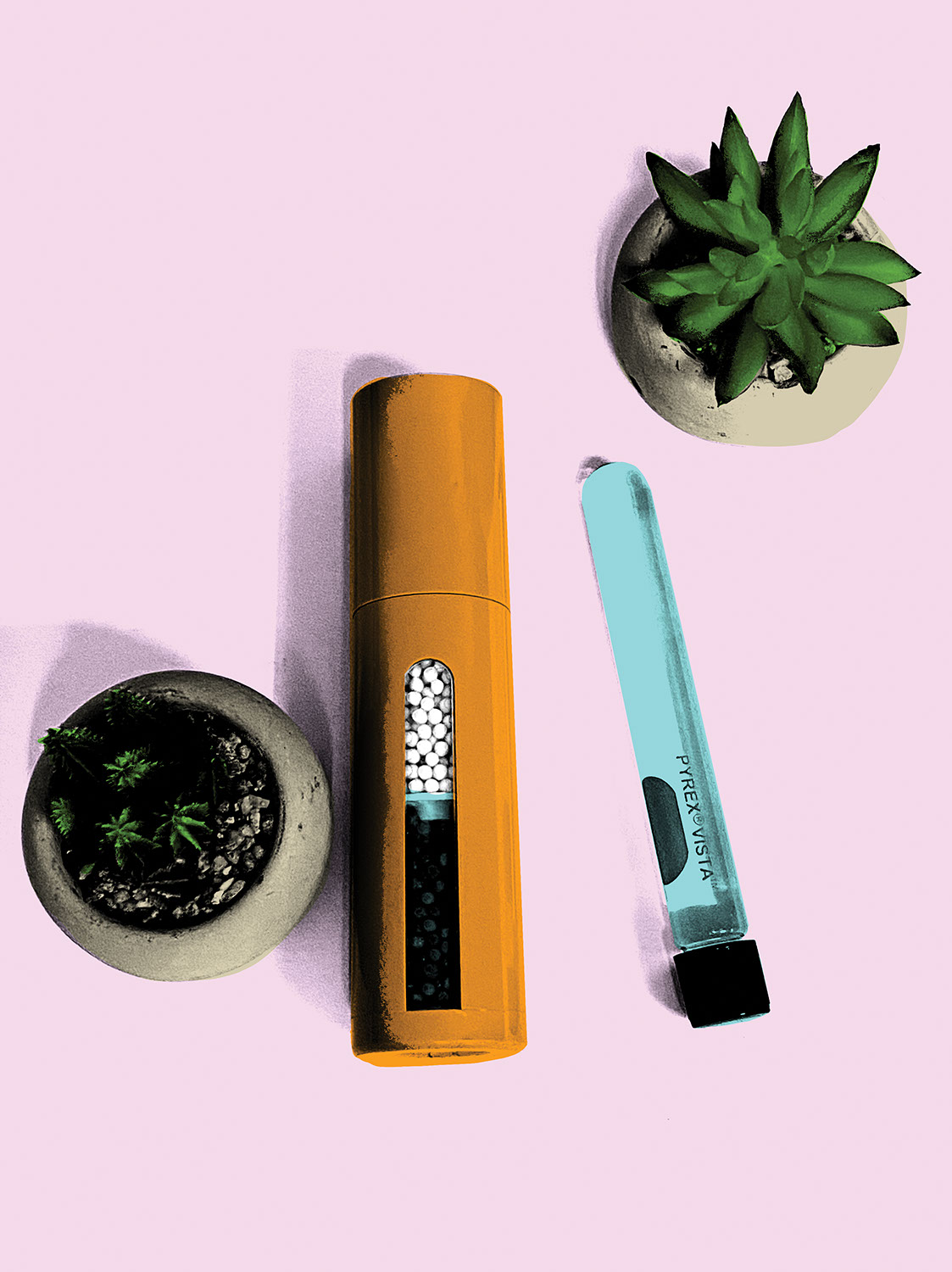 Sad fact: There are billions of tons of waste in landfills throughout the world. But in recent years, beauty companies have become more aware of the role they play in this sad problem, and have been incorporating Earth-friendly alternatives, such as eco-forward packaging and greener formulas, into their mix. However, one beauty brand—Alkaglam—is taking it even further. Much, much further.

Alkaglam, a California-based brand that was founded five years ago by Michelle Vidal, has created a facial mist like we’ve never seen before. For starters, it is the first refillable facial mist on the market. No, this doesn’t mean that you have to head back to the store with the bottle, buy in bulk, or even send it in via the mail for a refill. Instead, you just refill it right at home with filtered water. Pour a bit of water into the bottle and all the magic happens. That’s it. The system then infuses your filtered water with minerals, such as magnesium and tourmaline, and hydrogen gas that acts as a miniature thermal spring modeled after the ones found in Lourdes, France (fancy, right?). It’s as simple as that.

Okay, there is a bit more to it, but to be honest not that much. After adding in filtered water, all you have to do is let it sit for 20 seconds, shake, and then spray. What’s created is a mineral-rich facial mist that vastly improves skin hydration. All of the hard work was taken care of pre-consumption, leaving the user with a beauty product that can be refilled and reused for up to 12 months. The system also comes with pH test strips which allow you to test the pH levels of the mist to let you know when it is time to replace it. Once the year is up, simply buy a new system. It is sort of like a DIY, at-home science experiment, but instead of constructing a papier-mâché volcano I am concocting the second step of my skincare routine.

As it turns out, the Alkaglam device was built out of necessity—Vidal, a UCLA grad who worked in water filtration, was struggling with acne and scarring and wanted to find a solution for her skin issues. After countless failed products and fruitless visits to dermatologists, it was an unexpected source who helped her reach a remedy: her father, an engineer at a water filtration company. “My father knew that high amounts of zinc and magnesium could help the skin, so he created a small filter that took out chlorine from water and added in minerals,” Vidal says. After using this water on her face every night for one month her acne began to clear up. In fact, the method had completely transformed her skin. “I decided that I wanted to create a portable version of it, so I came up with a mist that uses the same concept in changing the composition of water, releasing high concentrations of zinc, magnesium and tourmaline,” Vidal adds.

In order to do this Vidal and her father crafted a portable system that uses O-Dobi beads. These beads are ceramic and clay encasings of minerals, such as pure magnesium and tourmaline. Vidal explains that when they come into contact with water, the elements are slowly released to help alkalize the liquid and infuse it with hydrogen gas. The magnesium beads also help to break up H20 molecules, making them easier to absorb, and the tourmaline beads help energize the water, allowing it to better revitalize skin cells. “The beads simulate a thermal spring—just like water would pass through mineral rock, picking up calcium, magnesium, and other minerals, the Alkaglam performs the same,” says Vidal.

Unlike other facial mists, the Alkaglam’s setup is able to maintain its potency because of these beads. “I saw that aerosol mineral mists on the market depleted in mineral properties quicker,” adds Vidal. “I knew the only way to keep the concentrated levels of the minerals inside of the liquid was for the minerals to stay in constant contact with water.”

When I first got wind of the Alkaglam system I have to admit, I was excited. I’ve always been a sucker for facial sprays — my college years found me obsessively using Evian’s mineral mist while on long flights, and Mario Badescu’s popular rose water held a permanent spot in my makeup bag during the peak years of my cystic acne. I have always felt that facial sprays possess that certain je ne sais quoi that can make you feel like a whole new person with just a few pumps.

So, I was happy to find that after using this product for a month I noticed a marked change in my skin. (Side note: I am still using it today and my boyfriend has bought in, too.) My skin is finicky and extremely sensitive.Cold months cause extreme dryness; warm weather makes my oil levels go haywire. If I forget to wash my face just one night I’m screwed. I also have issues with redness and inflammation from hormonal acne that manifests as giant cystic pimples on my chin (fun, I know). As it turns out, the Alkaglam system completely balances out my skin, dispelling it of any redness while also helping my problem areas heal faster. Not to mention the raised levels of hydration—my face has never felt so soft and supple, even on days where I forget to moisturize. This product, at least for me, took care of my hydration levels and redness issues, with no significant change towards blackheads or clogged pores (don’t worry, I have HydraFacial for this). There were also no side effects, except for some tightening and tingling the first few times I used it due to the tourmaline. For me, I find it works best if I use it right after I shower or wash my face, and again after I put on makeup.

Curious to learn more about the science behind this product, I reached out to Dr. Hadley King, a board-certified dermatologist who is also a Clinical Instructor of Dermatology at the Weill Medical College of Cornell University. Dr. King says that although there is not a lot of data available on the effects of topical applications of these minerals—and the oral consumption of electrolytes is really the critical factor for body function including the skin—there are some studies that suggest that they may have beneficial effects when applied on the skin’s surface.

“As it turns out, the Alkaglam system completely balances out my skin, dispelling it of any redness while also helping my problem areas heal faster.”

For example, there is some evidence that a mix of calcium and magnesium can help with skin-barrier repair, and magnesium salts actually proved to speed up the repair. Other research shows that magnesium chloride applied topically does have a positive effect on the skin’s inflammatory response. Dr. King also adds that similar results were discovered regarding the inorganic compound, zinc oxide. “Several studies show that topically applied zinc oxide significantly promoted wound healing,” says King. “It has a long history of safe and effective use for sunscreen and for skin rashes such as diaper rash, eczema, and ulcers.”

Hydrogen, another key component of Alkaglam’s facial mist, has also been shown in studies to help heal skin conditions. According to a 2019 study published by the National Institute of Health, hydrogen-rich baths actually helped improve individuals’ stress-related skin disorders, such as psoriasis. Vidal reports that people with skin issues, such as redness, eczema, rosacea, and dry skin, have especially found success with her product.

“We think hydrogen is going to really start hitting the US market soon,” says Vidal. “Hydrogen in Japan has become a huge phenomenon where people are even starting to use it in IVs and are bathing in hydrogen water to reduce redness.” This led Vidal and her team to make sure their product included hydrogen. “When you first use it those tiny bubbles are hydrogen,” she says. “That’s what is happening there.” Gotta love science.

In my reality, I’ve become used to running out to Sephora to repurchase my hero beauty products every three months. So, Alkaglam’s refillable facial mist is a welcome relief. Unlike other products on my beauty shelf (I am looking at you Sunday Riley A+ and Cerave PM moisturizer) it allows me to take back some control. No more product? No problem! All I have to do is add a bit of filtered water into the bottle. No more rationing of $125 retinol products. No more cutting open my moisturizer tubes with a steak knife to get the last few bits of cream. No more having to toss containers every few months. Major bonus: Alkaglam’s facial spray will set you back only $55 for a year’s worth of product. And because it holds 50ml of liquid in it at a time, I can also throw it in my carry-on without second thoughts.

In my little world, that’s the beauty of Alkaglam’s product. For the larger world, the company’s groundbreaking efforts are making important advancements—setting a whole new bar, really—for sustainability. Here’s hoping other beauty brands could follow suit.