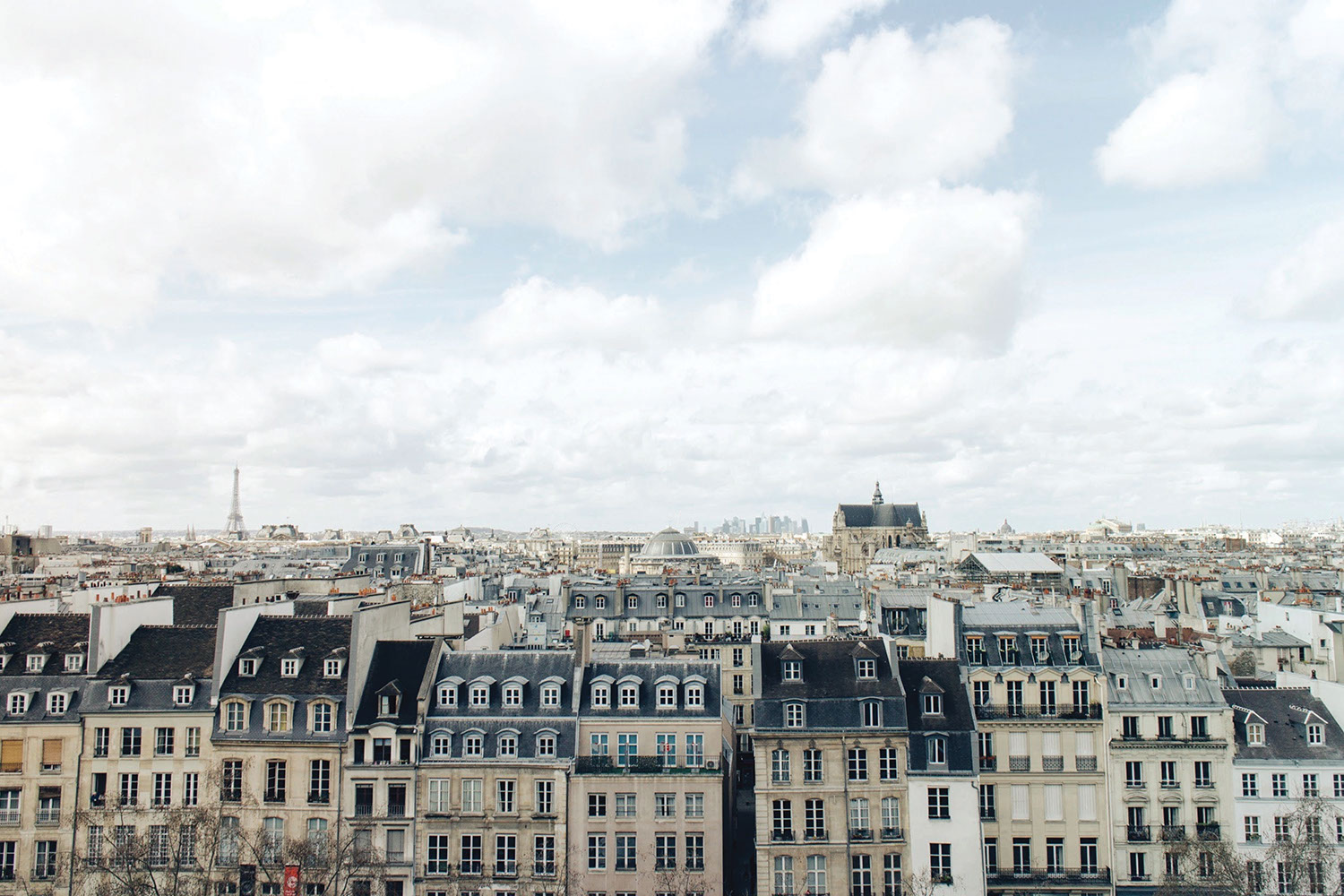 at most, Hemingway-levels of literary inspiration and, at least, a better understanding of how to apply red lipstick and/or one if not several stories involving unpasteurized French butter on a freshly made baguette.

The move came after a string of big decisions in my life. Two years prior, while living in New York City, I left a colorful magazine career with a steady paycheck to become a freelance writer. It had long been my dream to be my own boss, and, truth be told, I’d always figured I’d one day get married, have children, and make the shift then. By age 37, however, the spouse and the kids hadn’t happened. So I took a hard look at my truth, saved every penny, and gave myself permission to go freelance anyway.

Choosing to stop waiting for my life to “start” was, unsurprisingly, the right decision—and business boomed. Once I’d said yes to me, the positive responses to everything else leaped off my tongue. Would I like to write content for my favorite company, the American design icon? Yes. Would I be interested in collaborating on a book with a host of Good Morning America? Absolutely, yep. Would I like to split a small studio in Paris with a girlfriend for three months, research a follow-up book to the first? That yes came out quicker than the pop of a cork on Bastille Day.

I’d always been a traveler. And my job now didn’t require me to write from one location. Why not combine the two and see how it felt to work from anywhere in the world?

I’d soon be a changed woman, I thought. There would be days spent writing furiously from a charming café, nights spent sipping rosé by the Seine. I’d return to New York joie de vivre-ing all over the place, maybe even knowing how to correctly pronounce joie de vivre, too!

Halfway through the trip, however, though much writing had been completed and many toasts had been raised, no personal transformation had occurred. Instead, I met a Frenchman who said he preferred me as I was.

Two years later, I moved to Paris permanently and in 2018, I became the Frenchman’s wife.

It’s only now, a few years into the experience, that I am seeing any sort of change, for better or worse. I can now pronounce joie de vivre (for the record, though, in an accent that is still distinctly American). The biggest shifts, however, have come in how I see the world—and myself in it. Here are some basic lessons I’ve learned so far. Spoiler alert: None will advise you how to apply red lipstick (I still haven’t discovered that), but at least one will involve mustard, as any self-respecting essay involving France should.

1. Start with hello. This seems standard, right? Oddly, one of the first lessons France taught me is that any interaction—stepping inside a bakery, passing a neighbor in your apartment building, buying stamps at the post office—must begin with a “Bonjour.” You won’t get anywhere fast without first acknowledging a person’s presence. (Hence the stereotype of the “rude French waiter” is faux; he most likely thought you were rude if you didn’t say hello when he approached your table.) When I return home to the U.S., it’s now a habit I try to practice there, too—especially as I knew it used to be normal for me to order coffee from a barista or enter an elevator with another person without so much as a glance. Maybe I’d been trying to be more efficient, but taking an extra second to say hi—to recognize another person’s humanity—doesn’t actually waste anyone’s time. As a bonus? It also builds community. I am now familiar enough with our local pizza maker, grocery store owner, and pharmacist to greet them on the street. As Paris reopened after the Covid-19 pandemic, these were the first people we made sure to support. It’s made my big-city neighborhood feel smaller and more personal. And it all began with a simple “hey there.”

2. Your job description does not define you. In France, if you’re at a dinner party or being introduced to someone, there’s a fair chance what you do for a living will not come up in conversation. Your passions, your opinions, your family life, or even what you’re eating (and what you plan to eat next…this is France, after all) might be questioned more quickly than how you spend your 9 to 5. This is due to an understanding that your job is not who you are. “We have a saying,” my Frenchman explains. “‘You must work to live, not live to work.’” Admittedly, this sentiment goes against much of how this Type A, former New Yorker has always operated, particularly as being a writer is a source of pride. But the reminder that I am more than the money I bring (or don’t bring) to the table—that who I am is how I live and move in the world—feels like a healthier understanding of my self-worth.

In France, if you’re at a dinner party or being introduced to someone, there’s a fair chance what you do for a living will not come up in conversation.

3. People who speak your language with a foreign accent are heroes. On a personal level, if my Alps-born husband had not learned English, we would have never connected—particularly as I came to Paris as the former president of my high school Spanish Club and couldn’t say much beyond bonjour and fromage. But now I can attest that learning a new language, particularly as an adult, is not for the faint of heart. To meaningfully express yourself outside your mother tongue is something to be celebrated. Before, when confronted with someone speaking English as their second language, I might have felt impatient or inconvenienced. Today, I feel only admiration. These are brave, hard-working people who have the ability to connect with others beyond their own culture. We should listen to what they have to teach us more intently and more often.

4. Be gentle on yourself as you learn something new. Ahem. Please refer to the above. As a person with a full-time job writing in English but now also living in France, I know learning a new language is rewarding—and also daunting and difficult. I’d always been a high-achieving student (Spanish Club president, ¡hola!), but my mastery of French hasn’t come as fast as I would have liked. At first I felt ashamed—Why am I not fluent yet? Where is my A+? Every time my mouth opened, I’d fail. But as time has gone by, I’ve pushed myself to enjoy the process. Mostly, I’ve learned it’s best to laugh. For instance, I recently went to collect a package. The counter clerk asked me about the size of the box. “It is for a sweater for me to wear,” I responded. I heard him chuckle. He gently pointed out that I’d said, “It is for a chicken for me to wear.” I chuckled back and made a joke about being a vegetarian, which I probably flubbed, too. Still, we laughed. My goal now is to be proud that I am out there trying. There is no shame in that.

5. Your desk is not a dining table. In French companies, it is custom for co-workers to break for lunch and eat together as a group. There is no running to the cafeteria for a salad to go, no grabbing sushi takeout to eat alone while you scroll through Twitter for ten minutes before getting back to task. I am talking a sit-down-for-at-least-an-hour, eat-with-metal-cutlery, end-with-a-dessert-and-maybe-an-espresso kind of lunch. There are business benefits here, of course: it fosters relationships; it’s a way to exchange information; and, naturally, it sparks creativity, which always happens when you’re more relaxed. But it also forces a real break for your mind and body, away from whatever machine you’ve been hunched over. Like me, my spouse is a freelancer. He usually works in studios throughout Paris, but when a project allows him to work from home alongside me, he still expects us to stop for lunch and eat around the table. Admittedly, I might sneak a quickie meal if I am home alone on occasion—I am American, after all—but the times I do take a real meal make me feel less spent by the end of the day.

6. The smallest tweaks in perspective can have a large impact. One of the first things I studied in language class is how to use avoir, the verb for “to have.” The French use it for something basic—like answering how old you are. In English, we say, “I am 37 years old.” But in French, you’d say, “I have 37 years.” Here, you have years, as if it’s something you own (like, say, a beautiful collection of vintage Hermès scarves you’ve collected over time) or something you’ve earned (like the highest score in a game of petanque). Maybe it’s just the word nerd inside me, but I appreciate this way of looking at age. It’s something that belongs to you, not something you are.

7. Protect yourself proactively through change. The most luxurious thing I’ve afforded myself after my move was not designer duds or never-ending bottles of champagne. It’s been therapy. I recognized quickly that, though I was facing exciting events—getting married, moving abroad, navigating a new language and culture—any sort of change comes with stress. And this was a lot of change. So, even while friends insisted I was “living the dream,” I found some extra support as soon as I noticed the first twinge of feeling overwhelmed. I’m lucky enough to live where I can find a bilingual therapist who specializes in helping expats. But if I didn’t, I’d look for a therapist who works via teleconferencing or an online support group. It’s kept me grounded and reminded me that no amount of the Paris filter on Instagram is enough to make la vie in a new country—even one as storied as France—seem all rosy, all the time.

8. Call a truce on cultural differences. It’s a given that communication is vital in a relationship. In ours, the obvious difference—me being from America and him being French—ups the stakes. Though my husband is bilingual and we speak English together, there’s still some patience needed given that English is my first language (and I am a writer…a double whammy). In the end, though, that just boils down to semantics; the things that really trip us up are cultural differences. These come from a mish-mosh of elements—dating rituals, family customs, the governments we’ve lived under, our countries’ values, and plain, everyday norms. They form hurdles when you least expect it. But once we recognize it’s only a cultural difference testing us, we raise a white flag and remove judgement. There’s no changing these differences, but they do inform us about what’s going on. We now respond with respect, not anger. And instead of pulling us apart, this understanding has managed to bring us closer together.

9. A proper mustard vinaigrette can change everything. Moutarde, or “Dijon mustard,” as we call it in the U.S., is a source of French national pride—and is now almost always on my table in some form. My favorite is the mother of all salad dressings—the homemade mustard vinaigrette—that puts bottled versions to shame. Use it to wake up salad greens, cooked or fresh vegetables, white fish, or lentils. I promise it will add a little French joie de vivre…even if you don’t know how to pronounce it.

One part grapeseed or sunflower oil

Beat with a fork until oil and mustard are smooth and creamy.

Make just before serving and store afterward in the fridge, ensuring you beat until creamy before the next serving.