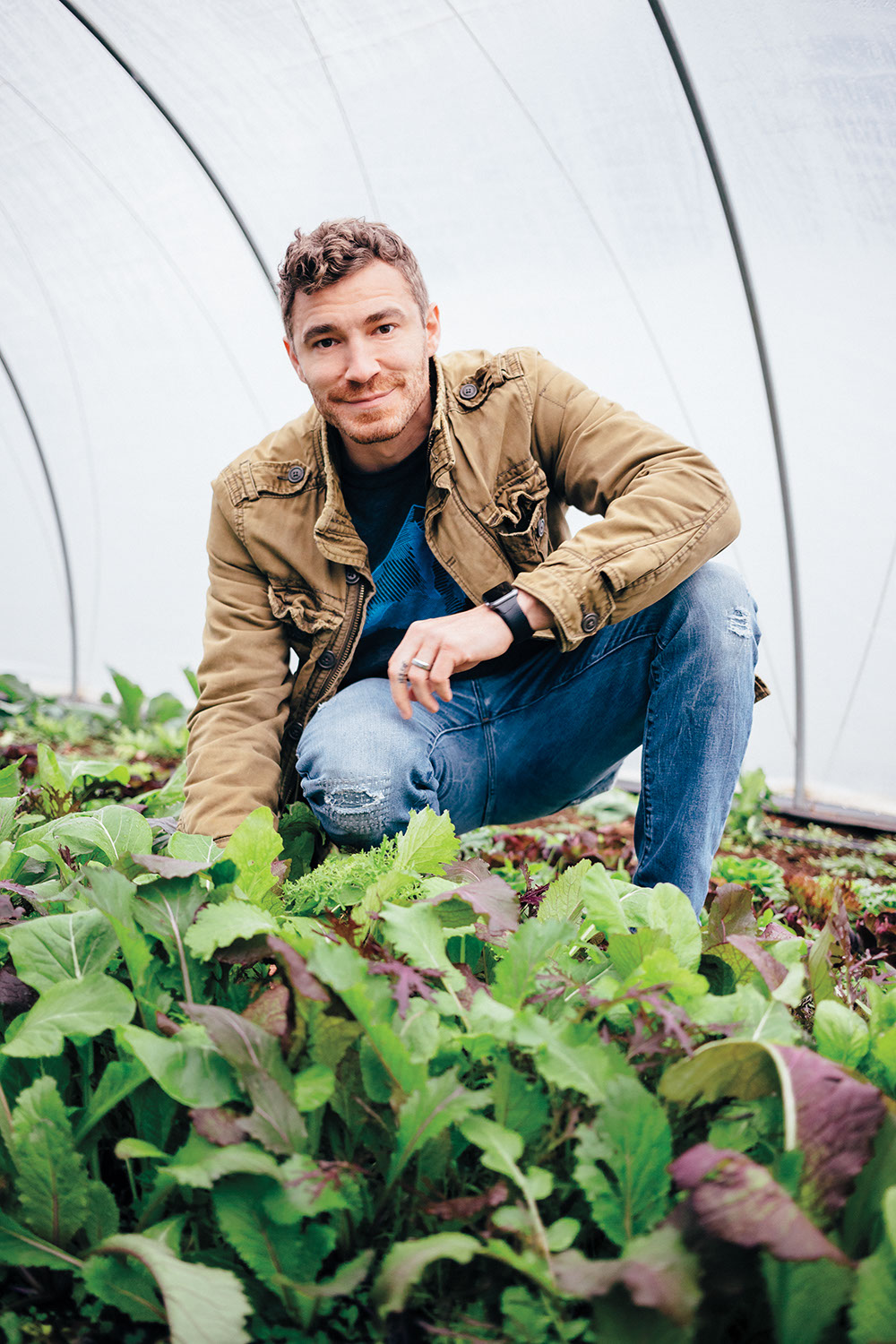 Chef Garrett Benedict is cruising through the Willamette Valley, the heart of Oregon wine country, in his 1973 white VW Bus by fields of hops and small family farms. He’s headed toward Olde Moon Farm, where his friends and farmers Jordan and Jay Uth grow over 70 varieties of produce for Garrett’s restaurant, G-Love. When Garrett arrives, he finds Jay cleaning darling, miniature butternut squash in the most divine shade of creamy coral. The chef muses that he’ll serve them roasted with a gravy made from foraged mushrooms and a quince BBQ sauce topped with pickled onions. They begin to pick fresh leaves straight from the ground and pop them in their mouth, like a peppery mustard green that in a matter of hours will be on a plate in Garrett’s restaurant in the Slabtown neighborhood of Portland.

G-Love—so named thanks to a nickname Garrett earned in high school—has been years in the making for the 32-year-old chef. He opened his first restaurant last fall with an innovative concept designed to flip the focus from animal protein to vegetables. He calls it a “reverse steakhouse,” which means produce shines in vegetable-driven entrees and a small selection of proteins play supporting roles as side dishes. Garrett’s goal: Create something that has a smaller carbon footprint that’s better for the planet and better for people’s health, and that adheres to the credence that every little thing you can do to combat global warming counts. Besides, he adds, “There’s a lot more room for creativity when working with vegetables. It’s simple to make a cut of steak taste delicious but it’s more difficult when you’re working with broccoli, cabbage, or cauliflower. And for me when it’s more challenging, it’s more rewarding.”

On a recent busy Sunday night, Garrett commands the open kitchen situated in the middle of his sleek modern restaurant, one that’s all windows and natural wood. As he moves quickly from cooking to plating dishes, he looks like a cross between a J.Crew model and Justin Timberlake. His personal challenge to use the produce grown at Olde Moon Farm has inspired inventive dishes, such as smoky and comforting fingerling potatoes with a crème fraîche dip, basil oil, and citrus trout roe. Or an irresistibly rich Farro porridge with roasted Brussels sprouts, parmesan, matsutake mushrooms, and chimichurri. Not to mention the Robata—Japanese inspired skewers—made with beets and carrots grilled over an open flame.

I call G-Love an American restaurant. It’s a melting pot with no borders.

Growing up in Anchorage, Alaska, Garrett knew he wanted to leave the area some day and pursue a creative career. When he was 14, a friend’s mom gave him the book, “Becoming a Chef” by chef Andrew Dornenburg and his Harvard MBA wife Karen Page (Wiley, 1995). He read the whole book in a couple of days and that was that, his career path was set.

“There was a heavy dose of mystique. I was attracted to the romance of it,” he recalls. “I always thought I’d be an artist of some sort. I entertained the idea of being a potter or a painter or a writer, but I wasn’t that good at those things.” He got his first restaurant job as a prep cook in an Italian restaurant and his mom indulged his passion by enlisting him to make ambitious family dinners, like the time he decided to follow a recipe from Thomas Keller’s “French Laundry” cookbook for sous vide lamb with mint oil, asparagus, and morels. They didn’t eat until 10 p.m. that night.

After high school, he enrolled in the Culinary Institute of America in Napa Valley, California. Upon graduation, he secured positions in Michelin-starred kitchens like AL’s Place in San Francisco and Ubuntu in Napa Valley (the first vegetarian restaurant to earn a Michelin star). When his parents retired to Portland and bought a plot of land, which later became the locale of Olde Moon Farm, Garrett decided it was time for him to make his move, too.

So far, his reverse steakhouse concept is a success. “We’re not reinventing the wheel here,” he says. “We just want to make it easy for everyone so they can eat in a more healthful way.” With no dish more than 20 dollars, and a full bar with artisanal cocktails, the restaurant aims to be an affordable, accessible destination for vegetarians and omnivores that showcases flavor profiles influenced by Garrett’s favorite cuisines—Thai, Japanese, and Southern Italian. “I call G-Love an American restaurant,” he says. “It’s a melting pot with no borders and that’s the way I like it.”

This crunchy umami bomb, loaded with healthy fat, was inspired by a kitchen accident. “I was making a bagel at home with sliced avocado,” says Garrett, “and I had some Everything Bagel seed mix and was going to sprinkle some on top, but the lid fell off and dumped a ton of seeds onto the avocado. It was amazing so I took that and ran with it.” Lucky for you, this recipe makes more seed mix than you’ll need so reserve it to sprinkle over steamed rice, atop salads or in a bowl of ramen.

Cut the avocados in half and remove the pit. Peel the skin off of all 4 avocado halves, being careful to maintain their natural shape.

Using a spoon lightly press the seed mix onto the outside of each avocado, leave the cut side of the avocado without seed mix.

For the Coco-blackspice Seed Mix

Add the oil to a medium heavy bottomed pot.

Add the flax, white, and black sesame and salt to the pot.

Turn the heat to high and toast until the white sesame just begin to pick up color. Keep stirring and moving the seeds around the pot while they cook so they don’t burn. The white sesame seeds should be a light golden brown after about 3-5 minutes.

Add the chia and poppy seeds.

Continue toasting and stirring the seed mix for 1-2 minutes.

Add the coconut flakes and continue toasting until aromatic and the coconut is golden brown, about 1-2 minutes.

Turn the heat off and pour the hot seed mixture onto a large plate or platter lined with paper towels to soak up the excess oil.

Stir the seeds for 1 minute as they cool so they don’t burn.

When the seed mix has cooled slightly, after 1-2 minutes, add all of the spices and sugar.

Once cooled to room temperature, stir to fully incorporate the spices and sugar into the seeds evenly.

Note: This recipe will make more seed mix than you need but it can be stored in an airtight container for up to 1 month.

Marinate the shallot and lime zest in the lime juice for 5 minutes.

Add the salt, tamari, and Dijon mustard to a small mixing bowl with the shallot and lime.

Slowly drizzle in the sesame oil while whisking. Repeat with the grapeseed oil.

You should end up with a creamy vinaigrette. if the vinaigrette looks oily or broken add another ½ teaspoon of Dijon mustard and whisk vigorously.

Use this dressing on any salad that has a mix of lettuces. Garrett suggests adding some fruit, too—dried cranberries, fresh apples, whatever suits your palate.

¼ cup plum jam (or any jam flavor you like)

2 tablespoons pineapple vinegar (We use an amazing brand called Vintage Vinegars, made in Hawaii, available online.)

Blend everything but the oil until smooth.

Slowly drizzle in the oil and taste. Adjust seasoning as needed. If you like more acidity, add a little more lemon juice. If you want it a little creamier, add more oil.

Store vinaigrette in a sealed container in the refrigerator. It will last up to one week but is best used immediately.