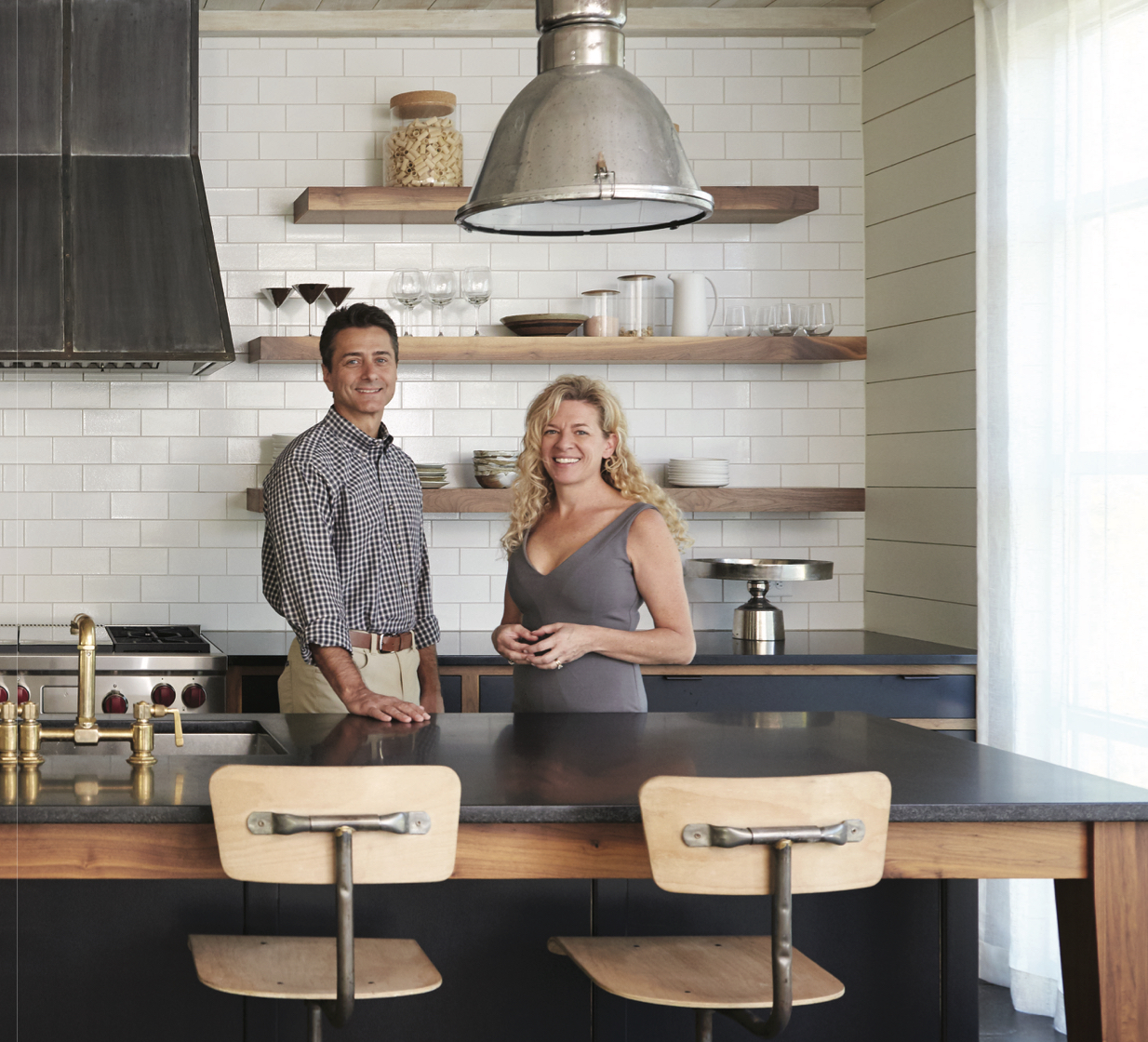 ABOUT 30 MILES AND a couple of light years away from Atlanta’s sprawl is a kind of anti-suburb nestled into the Chattahoochee Hill country. This is no scrape-and-build development with the rigid grid of homogenous, ho-hum houses. Serenbe is an environmentally-sensitive village where roads wind through four, free-form neighborhoods—or hamlets in Serenbe speak— which hug the land and leave plenty of nature in between.

Teresa and Chad Epple know those roads well. Better than anyone in fact, considering they designed them. The couple heads up Southeastern Engineering, the civil engineering firm responsible for the underpinnings of this self-contained community. In just over a decade, Serenbe has attracted more than 400 residents, including the Epples and their four children.

Though the couple was intricately involved in Serenbe’s development, they were ultimately seduced by it in the same way most residents are. In the beginning, they hauled their kids out for fresh-air country weekends at The Farmhouse, an award-winning inn and farm-to-table restaurant owned by Serenbe’s founders Steve and Marie Nygren. Before long, they enrolled their tribe in the community’s summer camps. Then in 2010, they went all in, purchasing an available lot in the community’s phase-one hamlet.

In the Serenbe master plan, each hamlet includes its own commercial hub for a village feel—think lamp-lined main streets rather than strip malls—that incorporate live/work structures into the retail and office mix. The Epples’ lot falls in one of the mixed-use zones—which was part of their own master plan. Since they are deep in the development of phase three of Serenbe’s four phases, there was plenty of work to be done onsite. “When phase three became a go,” says Teresa, “we decided we were going to be down here so often, it made sense to build an office and live above it.”

The Epples live in the home part-time, toggling between it and their primary home and business headquarters in Marietta. Still, the structure they built is a livable, thoroughly modern update of the concept of “living above the shop.” Because Serenbe breaks from the norm of other self-contained developments that fall into the “new urbanism” category, homes here needn’t fall into a strict architectural mold. And there are no model homes with a strict menu of components to choose from. But buyers must work from a list of approved architects and submit their designs for approval. All dwellings in the community must be EarthCraft certified which assures they adhere to regional standards for energy efficiency and sustainability. From that A-list, the Epples selected architect Michael Landry, who saw an opportunity to build in their preferred design genre.

”Industrial spaces are spaces that belong to the working man. everything has a function and materials are made by hand…”

“Our lot is a transition space,” Teresa explains. “to the left side is commercial and to the right side is residential. Our architect saw the modern elements in the hamlet and felt we needed to go full-on modern. It worked for me, I love the clean lines of the look.” Chad agreed, “It works well with a technical, modern office scene staffed with civil engineers.”

“Full-on modern” starts with the exterior. Landry suggested they break from the painted brick of many nearby structures, and build a straightforward, boxy structure clad in powder-coated aluminum and tempered with exposed wood. Endlessly recyclable, aluminum is an eco-conscious siding choice, especially when finished with a low-VOC powder coating.

Above the office level, the family retreats to 1200 square feet of enclosed living space, which is capped by an open-air rooftop living area that has a sweeping view of the green spaces left intact within the 1,000-acre development, as well as the surrounding Chattahoochee Hill Country.

The couple worked with interior designer Smith Hanes to forge an interior living space that would bridge the visual divide between the sleek commercial space and the green hills beyond—and be in keeping with the eco-ethos at the heart of this community. “When we saw his work we knew he would keep it comfortably, livable modern,” Teresa says. “He kept us from overbuilding or going too glamorous. It’s beautifully simple and at one with nature—it’s very Serenbe modern.”

“Serenbe modern,” it turns out, falls within the realm of Smith’s signature style. “The Epples asked we reach into our toolbox of ‘soft industrial design’ as inspiration for their interiors,” says Smith. “That’s how the interior steel and glass walls and some materials came about. There are many refer- ences to nature in art and artifacts, and since the house is in Serenbe, handmade was essential, right down to the plates and glassware.” In fact, the palette the designer chose was cued directly from the surroundings. “We collected tree bark and a wasp’s nest from the job site while the house was being built,” he says. “They really informed the whole process of colorizing the house.”

Teresa and Smith worked together to forge ideas that would, as she says, “keep the small and narrow house from feeling small and narrow.” She loved the idea of a glass-front pantry; he made it into a clear box made of glass with a steel frame. The idea is repeated in the master bath shower stall and in the clever bifold door that leads from the living room to the master bedroom. And she liked the idea of wood paneled walls; he flipped the boards horizontally and increased their width to 8 inches for a serene, modern feel.

The kitchen is the hub of the home, a space that walks a fine line between sleek and warm. The cupboard frames, fridge cabinet, and simple floating shelves are crafted from walnut, and contrast with poplar doors and drawer fronts painted chic black. Vintage pendant lamps punctuate the space, dropping down from wood ceilings that are the mottled gray color of driftwood. The pendants and the counter-height chairs look like they originated in a high-school chemistry classroom, or a factory floor—which is exactly the point. “Industrial spaces are spaces that belong to the working man,” he says. “Everything has a function and materials are made by hand—it’s a handsome look rather than one of extraneous beauty or frill.”

The bunkroom is the ultimate in shipshape—it manages to squeeze four bunks into a small, somewhat awkward space. The bunks operate like self-contained compartments, complete with reading lights and outlets ready to juice up tech devices. The other two sleeping spots in the home—the master and an additional guest room—also offer relatively tight quarters, giving over most of the space to an airy living room and spaces meant for gathering. This, too, is by design. “The bedrooms didn’t need to be large,” Teresa says. “In our minds, they are where you rest and sleep. There are no TVs.”

The fact is, this small home accommodates the family of six just fine, so much so that the clan had no problem living here fulltime for several months while their primary residence was being renovated. “At Serenbe,” says Teresa, “you don’t need too much interior space because there is so much to do outside.”