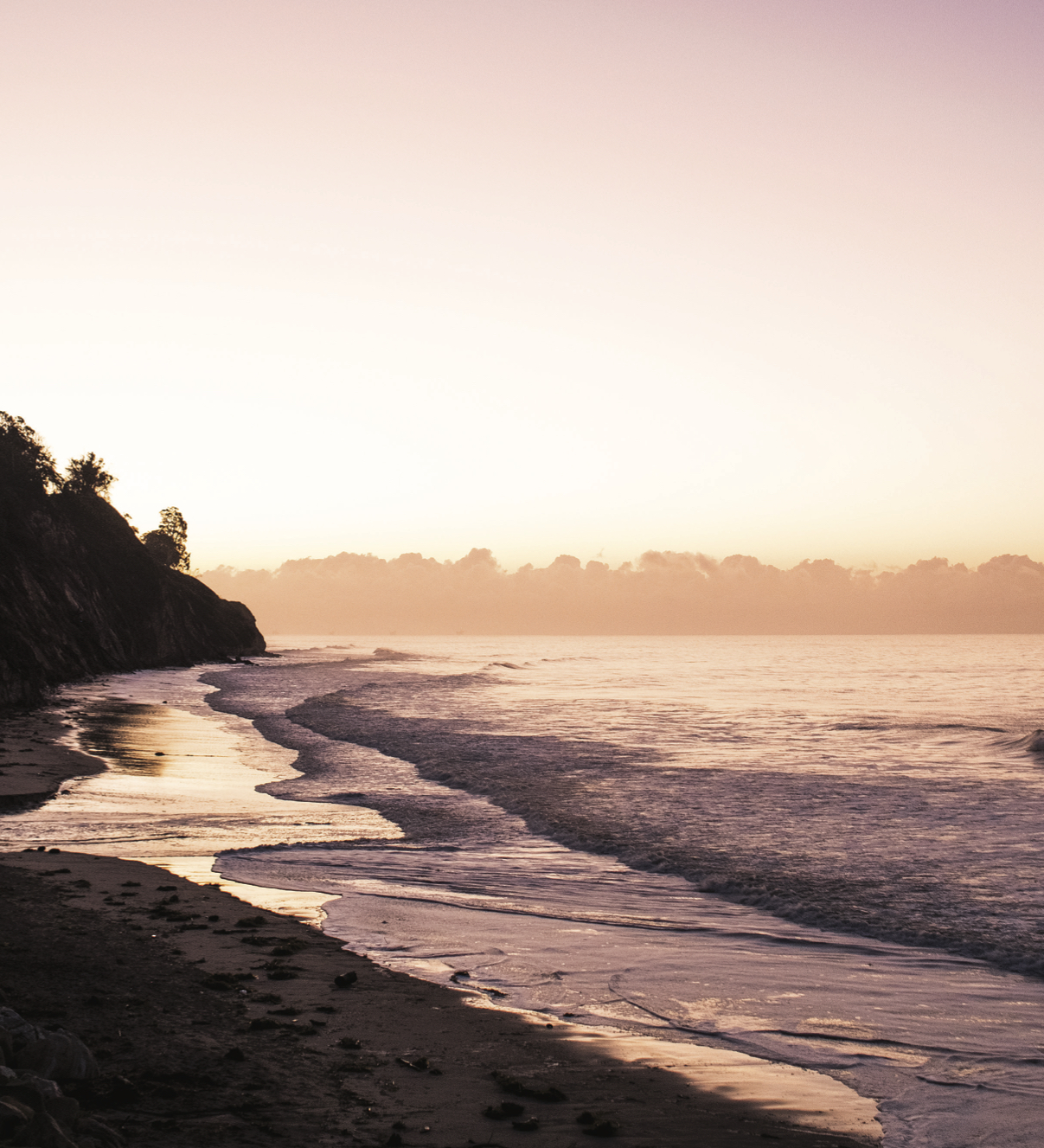 SANTA BARBARA IS a city of wonderful contrasts. For starters, there are the Santa Ynez Mountains and the Pacific Ocean, not to mention college students—and Oprah. There’s Julia Child’s favorite taco for $2.50, a quick cup of chowder on the wharf—or a multi-course tasting menu that’s blowing minds amongst today’s culinary elite. You can bike the coast barefoot and paddle out to catch some waves. Or, head inland for a little mosey amidst the bougainvillea and sidewalks that pulse with energy, especially in the Funk Zone, where converted warehouses covered in colorful murals host natural wine tastings and experimental art exhibits on a nightly basis. No matter the atmosphere you crave, or mood you’re vibe-ing, this coastal town and its creative class of do-gooders and dream-seekers are happy to provide it.

Those who like the idea of camping but the reality of a boutique hotel will love AutoCamp’s ever-so-hip Airstreams—they bring a bit of that s’mores life to the city. Situated about a mile from the city center and located inside a long-term RV park residence that’s been in operation since 1922, each of the six trailers manages to feel both polished and rustic. All white on the in- side, with the occasional pop-of-color via artwork, the “rooms” are equipped with flat-screen TVs, bath products from Malin Goetz, an outdoor patio with Adirondack chairs and electric BBQs, plus beach cruisers.

As its name suggests, you’ll check in here and never want to leave. Located smack-dab in the center of town, yet steps from the beach and right next to the Funk Zone, this 121-room hotel oozes contemporary luxury by mixing classic Spanish Colonial Revival architecture with Moroccan influences via the likes of bronze oil-rubbed fixtures and mashrabiya patterned rooms. Various balconies, verandas, and the rooftop pool offer stunning sea or mountain views, and the nightly turndown service features cheeky touches such as a handwritten poem or quote from the likes of Santa Barbara passersby, such as Jack Kerouac or William S. Burroughs.

The 37-acre garden oasis known as Lotusland was founded (and curated) by the ever-fabulous Ganna Walska, a former Polish show-girl who married six times and settled in Santa Barbara in 1941 following years gallivanting around Paris and New York. It’s easy to spend hours wandering her former estate, gawking at the mind-boggling array of flowers and plants that are each divided into different sections—from 140 types of aloe to the Australia Garden where native specimens include spear lilies, grass trees and, of course, eucalyptus. There are also tropical orchids and orchards of lemons (and kumquats and grapefruit!), not to mention a host of succulents and cacti—many of which are thoughtfully-staged amongst Moroccan tiles, giant seashells, and Japanese stone lanterns. You’ll be hard-pressed to find a fern that’s not represented at this amusement park for leaf lovers.

Art plays a starring role in Santa Barbara’s personality—be it on the street or in a gallery—and R. Nelson Parrish is one of its many talented contrib- utors. The Alaska-born artist works with a range of mediums (paint, resin, wood, etc.) to create painting-sculpture hybrids that burst with color. His first mural, “Long Days, Short Year,” launched the city’s Funk Zone Public Arts Program, but most of his work can be viewed by appointment only at his Boat Yard Studios workspace. When he’s not traveling, the 40-year-old can be found here, in dust-covered Carhartts, living and crafting the dream.

Despite its name, there’s way more than tacos at this no-frills sidewalk spot. What it lacks in decor it more than makes up for in flavor, serving the likes of seasoned rice balls filled with spicy tuna or a blackened chicken sandwich with melted pepper jack cheese along with a host of tasty gourmet tacos.

Fun fact: There are more than 50 different varieties of grapes grown in the Santa Barbara region. From the well-known Chardonnay and Syrah to smaller, boutique Albarino and Grenache Blanc, the multitude of micro-climates in the area make it possible to produce a range of sippable vintages from each of the reputable appellations that cover over 21,000 acres. Whether you start your tastings on foot in and around the Funk Zone or drive inland to follow a trail in districts such as Los Olivos or Lompoc, remember to hydrate with water in between every swirl, sniff, swallow, or spit.

What to expect when you’re within the orbit of Satellite, a natural wine bar and farm-to-table restaurant inside the city’s premiere co-working space, Impact Hub? All-natural everything—from cloudy, sulfite-free wines produced both stateside and internationally, to tasty snacks such as turmeric pickled quail egg rolls (topped with edible flowers) or baked carrots with bonito flakes. The space feels equally raw and earthy in design, with exposed brick walls, wooden countertops, and a front window that lets in the breezes. Whether you’re after a glass of Malbec, a pint of Hefeweizen, or even a Spritz, you’ll find it at this friendly spot that also hosts classes and pop-up events.

First things first: Do not leave Bibi Ji, the Indian food restaurant from Jessi Singh and Rajat Parr, without eating the Mr. Tso’s Cauliflower. The sweet tomato and chili sauce dish is a longstanding favorite at Babu Ji, the duo’s first restaurant, with locations in San Francisco and New York. Beyond this flavorful “street food,” as it’s listed on the menu, other modern takes on Indian cuisine include sea urchin biryani and anjeer kofta with cashew, rose water, and fig. Those with a curious and adventurous palate may want to try the chef’s tasting. At $50, it’s an unbelievable value that includes eight popular plates, the curry sampler and two desserts.

Located inside the Santa Barbara Fish Market building, this 130-seat restaurant presents shareable family-style food. The cuisine focuses on seasonal, locally grown products from nearby ranches, farms, and, of course, the sea. Here’s a sampling: chicken-fried Pacific oysters (yes, you read that right!) with green peppercorn and Meyer-lemon aioli; crispy Brussels sprouts with Medjool dates; and caramelized sunchokes with Calabrian-chile garlic. Slide up to the happening bar for one of their seasonally-crafted cocktails such as the gin-based “Rosaline,” made with goat-milk washed mezcal.

At his new shop on East De La Guerra Street, which he opened two years ago, third-generation leather-smith Steven Soria offers handcrafted accessories made primarily from equestrian leathers such as bridle and latigo. Developed to be strong, yet flexible and weather-resistant, the collection features a range of styles, from messenger and tote bags to passport cases, belts and even incense and plant holders. What’s more, they’re all made from materials sourced in the U.S. of A. and the leather is preserved via vegetable tanning—meaning it’s biodegradable since the only chemicals used include tannins from tree bark, limestone, and natural oils.

Inside The Blue Door—whose entryway is, indeed, sky-colored— lies three floors of new and vintage housewares, accessories, and just about anything else you can think of, be it a paperweight made from 1987-minted pennies to movie-set lights and vintage Louis Vuitton. Those who love unearthing a good knick-knack or parsing through piles at a garage sale will spend hours at this legendary warehouse, founded four years ago by Brian Garwood and his girlfriend Carolyn Peterson. The pair work with a variety of collectors to curate a unique shopping experience that can also feel like a museum visit given there’s so much to gawk at.

There’s something for Moms, Dads, and the kids at this charming boutique in the Presidio neighborhood, which is fitting since the shop was inspired by Jen Steinwurtzel’s two sons, Jake and Jones. It’s a wonderland of covetable objects—be it leopard-print sneakers by Seavees, striped beanies from Cabbages and Kings, or a water-resistant travel duffel by Rain. Drawing from her former career as an art therapist and yoga instructor, Steinwurtzel’s intent is to inspire “wonder and curiosity.” She regularly introduces new designers, and will soon unveil a dialogue pop-up called “The Ever Curious Series.” But impeccable taste and style-with-a-smile are always present.

Technically, Garde is located in Summerland, about six miles outside SB, but it’s worth the detour. Or, if you’re so enamored by the renovated Shaker barn that dates to 1921, you can stay the night at the 1,000-square-foot one-bedroom upstairs (mindfully decorated with wares from downstairs). Angelenos may recognize the aesthetic from founder and co-owner Scotti Sitz’s original shop on Beverly Boulevard, but here, the soaring ceilings, exposed beams, and sparkling natural light make it an even dreamier reality to explore. While the store stocks many of the same items to dress tabletops, jazz up floors, and brighten salons, there’s a larger selection of furniture and other Summerland-only surprises.

Located off America’s storied Highway 101—about 92 miles north of Los Angeles and a little over 300 south of San Francisco—Santa Barbara is easily reached by car, but its airport sees 40 daily arrivals and departures, too. Once you arrive in downtown SB, your best bet is to get around by bike, foot, or trolly as parking comes at a premium. Plus, it’s all about leisurely strolls by the pier, winding your way along coastal bike paths or weaving down alleys in the Funk Zone. Weather-wise, “America’s Riviera” sees about 300 days of sun year-round so there really isn’t a bad time to visit. Though the beaches do tend to be more crowded (and the water warmer) in the summer months.