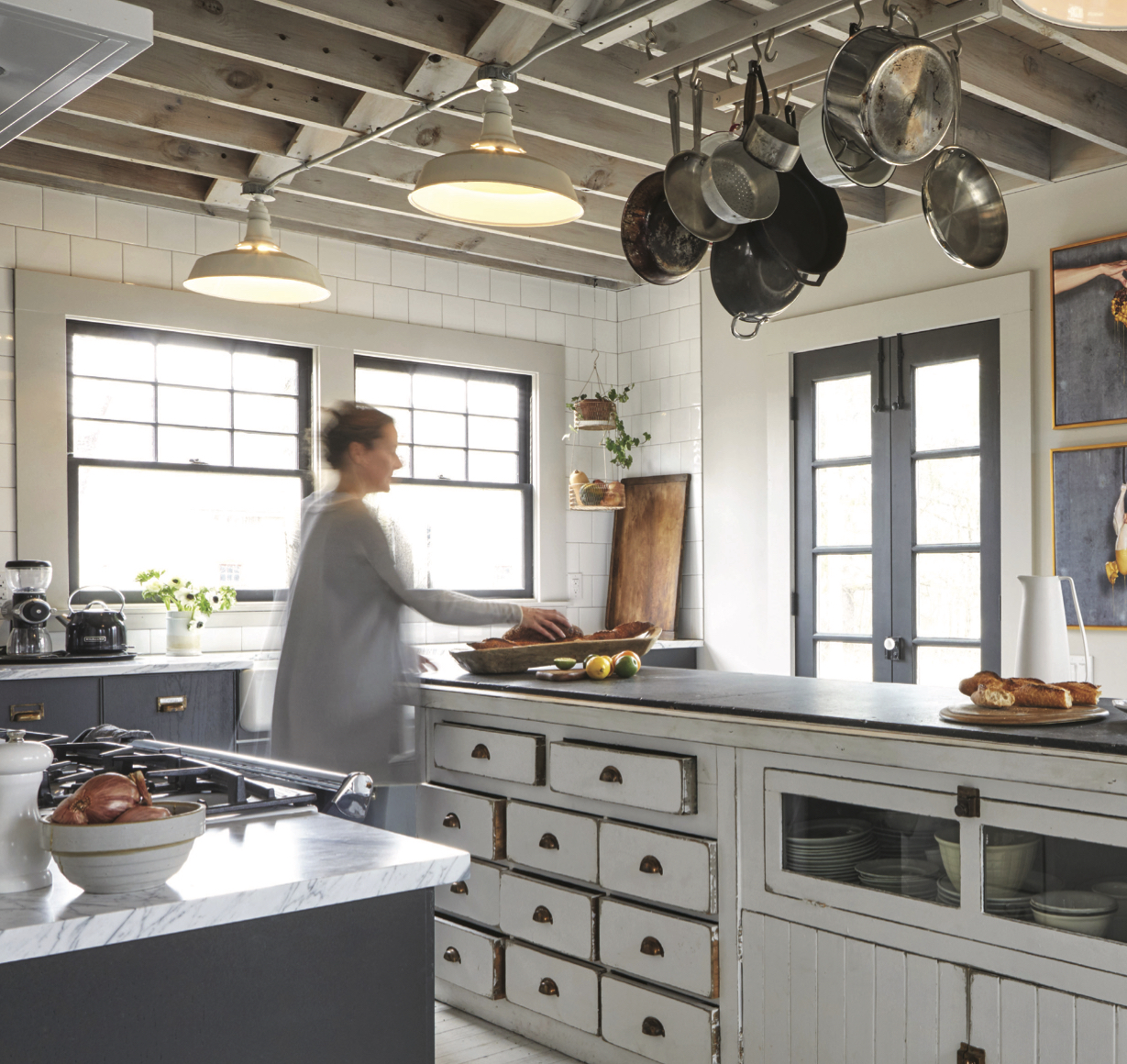 In fact, Johanna wasn’t even in the market for a house. She was really just looking to have a pint at the local brewery near her weekend home in Buchanan, Michigan, when real-estate fate intervened. “I was daydreaming and missed the turn,” Johanna says. “So I pulled into the first house that had a driveway, looked out my car window and I was just arrested by the size of this ruins of a house…it gave me goose bumps. Then I saw the ‘for sale’ sign.”

Where most people might, at that point, continue to the pub, Johanna called the listing agent instead. Upon closer inspection, the house only seemed more desperate. As in, there was no running water, electricity, or insulation. The 1920s farmhouse had sat, abandoned, for 11 years, and nature was reclaiming it with overgrown brush and landscaping gone rogue. Inside, it was a disaster. “There was plaster falling off everywhere—ceilings and walls,” she says. “But that was that. I had to have it. It was a journey of complete naivety really.”

Fast-forward a couple of years, a gutting of the interiors, plus thousands of decisions and dollars later, and Johanna’s journey has ended in a home that looks effortlessly simple. It’s bathed in white, so that light and shadow become a key player in the interiors. And it’s furnished with carefully selected pieces gathered over time. “I wanted a very calm feeling in this house,” she says, “so I’ve tried to keep that going. I was fighting some of my basic instincts—but I wanted to be intentional about my choices. And since it’s been two and a half years in the making, I certainly didn’t rush it, that’s for sure.”

It had captivated me with its forlorn, disconsolate state. Like an abandoned puppy you could not help picking up, I took the house into my care without thinking twice about the responsibility.—FROM JOHANNA’S BLOG, PARCHMENTHOUSE.COM

Hunting down just-right pieces is an endeavor Johanna is highly skilled at. In fact, she makes her living doing just that. As an A-list, Chicago-based photo stylist, she spends her days propping for shoots and arranging food and furnishings into captivating still-life images for clients such as Crate and Barrel and Sur la Table. Before that, she worked the other side of the camera as a photographer in London, where she grew up. So though she may have been a rookie when it came to a full-on renovation, she is a pro at envisioning the perfect piece and doggedly pursuing it. “I can become obsessed with finding something,” she says. “It’s my job as a stylist really; I’m paid to find a visual solution.”

Her sleuthing takes her from thrift stores to antiques shops to the far reaches of TJ Maxx (where she found the gray linen curtains that grace most of the windows). And sometimes, chasing down the just-right kitchen island takes her to Ohio in a rented truck, in a snowstorm. In this case, the piece was worth it—a multi-drawer, flagstone-topped cabinet that originated in the old Crayola crayon factory in Sandusky. “It was the first piece I bought for the house,” Johanna says. “And the kitchen was designed around it.” It took four guys and a Bobcat to set the island in place.

Johanna has been as restrained in designing the home’s backgrounds as she has in her furniture choices, with a palette that reaches only from shades of white to iterations of gray. Thought the walls had to be taken to the studs—considering the plaster was turning to dust and insulation needed a place to go—the architectural gems that lured her to the place remain, such as a stately mantel and French doors that lead to a window-lined sun porch. The oak floor was surprisingly intact, requiring only a whitewash of latex paint to ease it into the palette. The original windows also stayed, but new trim gave them more stature.

I’m not entirely sure I had a vision on this place, I just wanted to get my teeth into it. I think that desire has come with maturity and wanting stronger ties and deeper connections to things.

Some of the most impactful design decisions were influenced by the budget. When Johanna realized that the industrial steel doors she coveted were way out of her price range, she found a matte, charcoal-colored paint
to mimic the look for a lot less. It also inspired her to paint the windows’ mullions the same shade, acting like eyeliner to add definition to the architecture.

Other design decisions were inspired by memories. An antique cast iron tub adds sculptural beauty to the bathroom and brings a flood of warm memories from her childhood, when bath time was a happy ritual. And when awkward bookcases were ripped out in the living room, Johanna decided French doors would add the right character to the wall. “I had always remembered my best friend’s living room back home had French doors going out to the garden,” she says. “It’s where I kissed my first boyfriend in the rain. A romantic memory can sometimes lead to architectural decisions it seems.”

The garden is the next step on the journey, along with the renovation of the old barn on the property. One day, Johanna would like to share the now fully functioning, stunningly beautiful farmhouse and its 16-acre property with others, maybe as a retreat for people in her industry who need some quiet inspiration. She’s dubbed the place Parchment House, so perhaps she’ll just keep peeling back layers to see what is revealed.