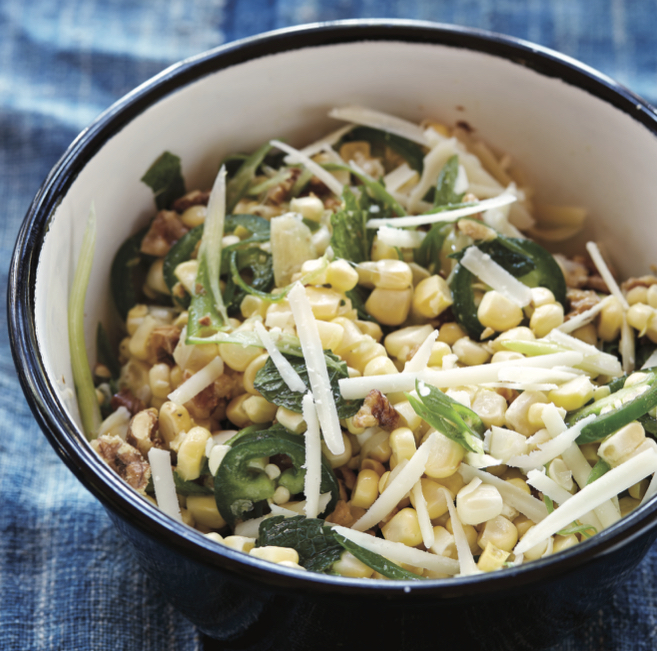 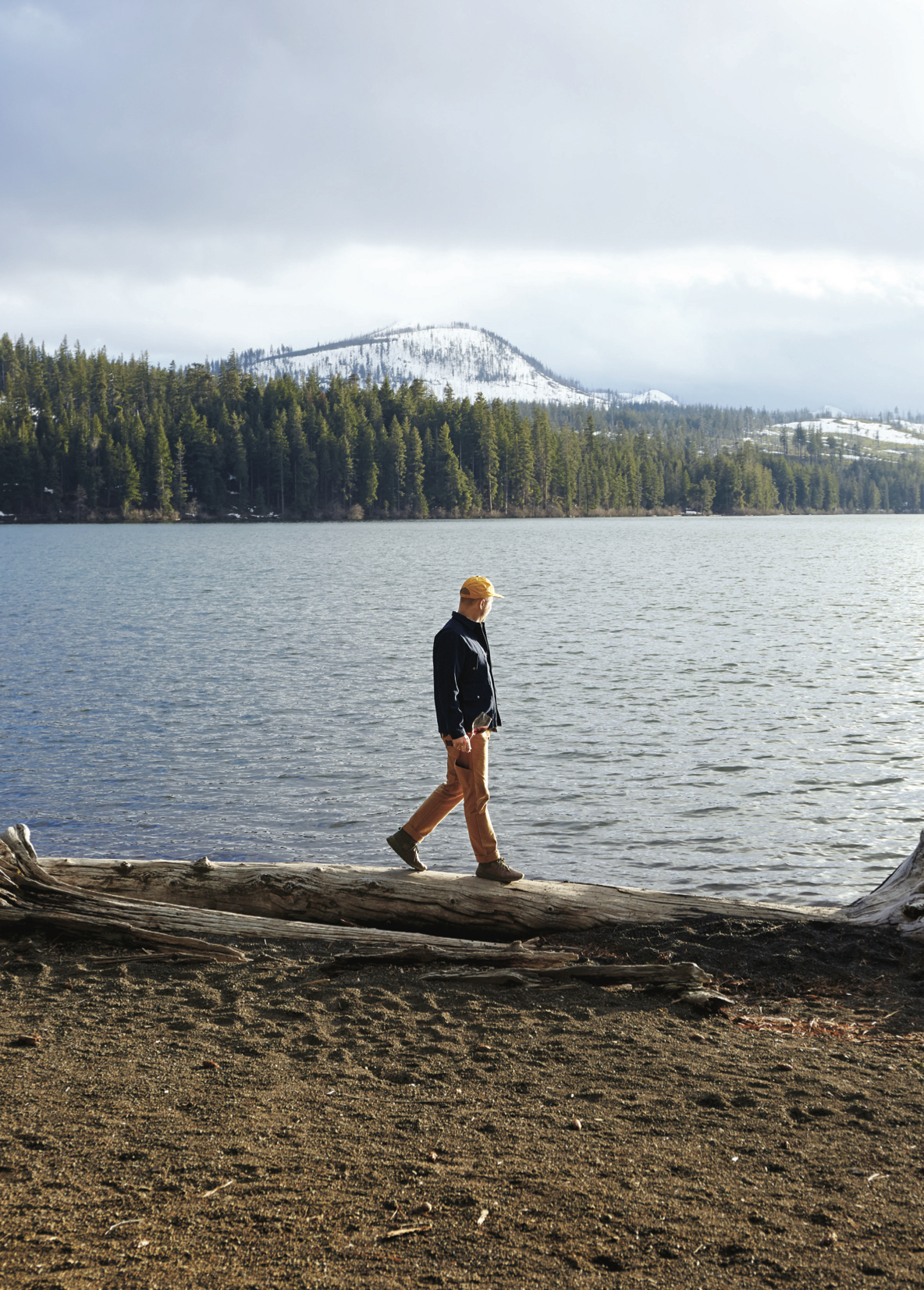 IT’S ELEVEN O’CLOCK on a Monday night and Joshua McFadden, clad in a hoodie and a baseball cap, is poking around in a dark open field about 30 minutes outside of Portland, Oregon. The chef, who’s come to be known as the “vegetable whisperer,” is not foraging for mushrooms or looking to pick ripe tomatoes or sweet corn under the stars—at least not yet. He’s seeking aliens.

“You just never know, you know?” McFadden asks in jest. “You get this beautiful piece of land and then all of a sudden you get this space ship right in front of you. I wanted to come out here at night and make sure that wasn’t the case.”

In truth, he was visiting with the intent of eventually developing a fully working farm “with vegetables and trees and animals and stuff.” He’s been looking for a piece of property for five years now and has visited this particular 88-acre plot four times during day. Now that he’s seen it at night, he’s ready to declare it a winner: “I think we’re good!”

So what does this farm have that others don’t? For one, water rights, which, he says, “is key.” But really, he’s most impressed with its location. It manages to be both an easy ride from his two restaurants in Portland—Ava Gene’s and Tusk, both of which he plans to stock with the produce grown here —but it’s also completely hidden away in the woods with a beautiful view of the mountains.

“I’m standing in the middle of nowhere because I want to impact a lot of people,” he says. “I want to engage in the community and enrich my restaurants and further my education. I want to create a place where the people who work for me can come when they need to get out of town for a bonfire and a beer. That’s my kind of hospitality and that’s where I’m at right now.”

Joshua makes it sound so easy, but he’ll be the first to admit it took over a decade of working 100-hour weeks and “eating meals over garbage cans in three minutes” to land at his “right now.” This includes partnerships in two successful restaurants, a new cookbook, Six Seasons: A New Way with Vegetables, projects like Suttle Lodge & Boathouse, for which he manned the menu, and, hopefully come July, his own farm. At 41, the dude definitely deserves his own bonfire and beer.

BORN IN RACINE, Wisconsin to parents with their own creative callings—his mom was an interior designer and his father was an industrial architect—Joshua always felt drawn to humble food, especially vegetables. “Prowling around my neighbors’ gardens gave me a hint that there was more than what was in the cupboards,” he writes in the intro to Seasons, which is co-authored by food writer Martha Holmberg. “Biting into a sun-warmed, plucked-from-the-vine tomato with a salt shaker in my hand; pulling a stalk of rhubarb from the ground, blowing off the dirt, and dipping it into a sugar jar. The elemental pleasures of those close-to-the-earth foods have stuck with me.”

Fast forward through film school in Chicago, which he swapped for culinary school at Le Cordon Bleu in Portland, and soon enough he was cooking with the pros at famed restaurants in big cities such as Roxanne’s in San Francisco and Franny’s in New York.

“One way or another, I started figuring out that it was all about ingredients,” he says. “Everything that I would be communicating with as a creative food person came down to an ingredient, from a cow to an onion.”

This concept led him to Four Season Farm in coastal Maine, where for over a year he traded night shifts for early morning wake-up calls, as well as indulgent one-hour lunch breaks and the occasional afternoon swim. “It totally changed my life,” he says. “I realized there’s way more to this cooking thing than just the cooking thing. It made me slow down.”

In theory, that is. After some time toiling in the dirt and watering seedlings, he “sealed his fate” by working at Alice Waters’ American Academy in Rome where he fell in tune with Italian produce and constructing seasonal, no-fuss food.

“When you have a simple bowl of pasta and you’re like, ‘God damn! Why is this so good?’, it’s because it’s made with local, fresh ingredients. What’s right outside my window is always what I’m using on the plate and I love that,” Joshua says. “It can be in the simplest form or with a little bit of manipulation though texture or acidity or fat or whatever. But there’s no place to hide. If you fuck up a dish that’s a perfect specimen of a tomato you’ve done something wrong.”

He returned to the states to not screw up tomatoes by opening Ava Gene’s in Portland with Stumptown Coffee founder Duane Sorenson, which has been lauded for plates like wood-grilled pork steaks with salsa verde, and an apple, walnuts, chili and lime salad. Tusk, a produce-focused Mediterranean spot, which he opened with new business partner Luke Dirks under their Submarine Hospitality group, followed suit in August 2016, and now he’s entering into his first full summer season as the consulting chef of Suttle Lodge and its Boathouse restaurant, which is hidden away in the Deschutes National Forest in Central Oregon. In the midst of it all there’s Six Seasons, his first cookbook jam-packed with 225 veggie-focused recipes that aim to teach people how to cook, rather than tell them.

“I truly wanted to create something that wasn’t coming from a chef’s perspective,” he says. “Like, ‘Yeah, just burn that and then don’t do it again.’ When you’re young, you fall on the ground and then you say, ‘Self, don’t do that again.’ It’s the same idea with food.”

The grounding principle, of course, is understanding the produce and their seasons, which is why you won’t be able to add a tomato slice to your juicy “Grandpa Burger” with griddled onions while cozying up by the fireplace at Suttle Lodge in January.

“No tomato in the winter!” says Joshua. “It’s not even an option.”

Come summertime, however, you can have all the tomatoes you like—so long as aliens don’t dig in first.

Put him in “the middle of the sticks” and Joshua McFadden is a happy man. So it’s no wonder he signed on to be the consulting chef at Suttle Lodge & Boathouse, located on 15.5 acres deep in the heart of the Deschutes National Forest in Oregon, where WiFi and cell service is super sketchy.

What’s more, his friends at The Mighty Union—a hospitality project which operates the Ace Hotel Portland, among other spots—were at the helm, which meant he had complete autonomy with the menu. “They allowed me to think seasonally and also about the locale, so we do very simple foods like fried trout sandwiches, grilled hot dogs and curly fries that you’d want to have in a lake environment.

It’s so easy to think, ‘Oh, I wish I had oysters’, and this and this and this, but it just doesn’t apply,” says Joshua, who has a Community Supported Agriculture order delivered by a Willamette Valley farm each week.

Whether you prefer hot chocolate by the fire in the winter or catching fireflies by the lake in the summer, this year-round rustic retreat offers main-lodge rooms and private cabins that manage to retain the spirit of a summer camp with vaulted wood ceilings, but the vibe of hipstagram-era decor like globe light fixtures. The lodge also hosts visiting chefs and Joshua will cook recipes from his Six Seasons cookbook on the lawn this July.

2 scallions, trimmed (including 1⁄2 inch off the green tops), finely chopped

6 medium pickled peppers, such as pepperoncini, cored and sliced into rings

Hot sauce, such as Sriracha

Cut the green tops from the carrots (see Note), leaving a tiny bit of green vis- ible on the carrots.

Cut off and discard the thicker part of the stems, keeping the feathery tops. Rinse and spin dry, as you would salad greens. Roughly chop the greens and measure out about 1 cup lightly packed. If the carrots need peeling, peel them, but if they are nice and tender, just scrub a bit and rinse thoroughly.

Put the carrot tops, parsley, mint, scallions, capers, and 1 teaspoon of the lemon zest into a bowl. Add 1⁄4 teaspoon of salt, a dozen twists of black pepper, and a few drops of the hot sauce and toss. Taste and adjust with salt, pepper, or hot sauce. Stir in 1⁄2 cup olive oil. Taste again and adjust so that the salsa verde is bright and bracing.

Heat a large cast iron or other heavy skillet over medium heat. Lay the carrots in the skillet (cut them in half, if needed, to fit) and cook until you hear a bit of a sizzle, about 5 minutes.

Add a small glug of olive oil and roll the carrots around a bit. Cook, rolling
so that all sides get cooked, until the carrots are getting lightly browned and tender, about 30 minutes—you should be able to smash them a bit.

Let the carrots cool slightly and pile into a large bowl.

Toss the squid with a small glug of olive oil, 1⁄2 teaspoon salt, and about 20 twists of black pepper. Heat the skillet used for the carrots until it’s very hot. Add the squid and sear, shaking and tossing so the squid cooks quickly, about 3 minutes. Add the squid to the carrots. Add 1⁄2 cup of the carrot top salsa verde to the carrots and squid, toss to coat, and let sit for a few minutes to marinate slightly.

Add the avocado chunks, another 1⁄2 cup salsa verde, the pepperoncini and the pickling liquid, and the lemon juice and very gently fold together. Taste and adjust with more salt, black pepper, hot sauce, or lemon juice. Drizzle with olive oil and fold again. Arrange on plates, sprinkle with pistachios, finish with another thread of olive oil and a sprinkling of lemon zest, and serve while the squid is still slightly warm.

“You can also grill the carrots for this recipe.”

Note: If your carrots don’t have greens or the greens look tired, skip them and use double the amount of parsley and mint in the salsa verde.

2 ounces Parmigiano-Reggiano cheese, shaved into shards with a vegetable peeler

Put the celery in a bowl of ice water and soak for about 20 minutes to heighten the crispness.

Drain and pat dry, then pile into a medium bowl.

“Try to use a really good olive oil for this salad.”

SERVES 4 AS A FIRST COURSE

2 ears sweet corn, husked, kernels sliced off into a bowl

1 or 2 small fresh hot chiles, such as jalapeño, seeded, deribbed, and minced

4 scallions, trimmed (including 1⁄2 inch off the green tops), sliced on a sharp angle, soaked in ice water for 20 minutes, and drained well

Serve the corn salad in a bowl and top with the shredded pecorino.

“You can also grill whole ears of corn before cutting off the kernels.”