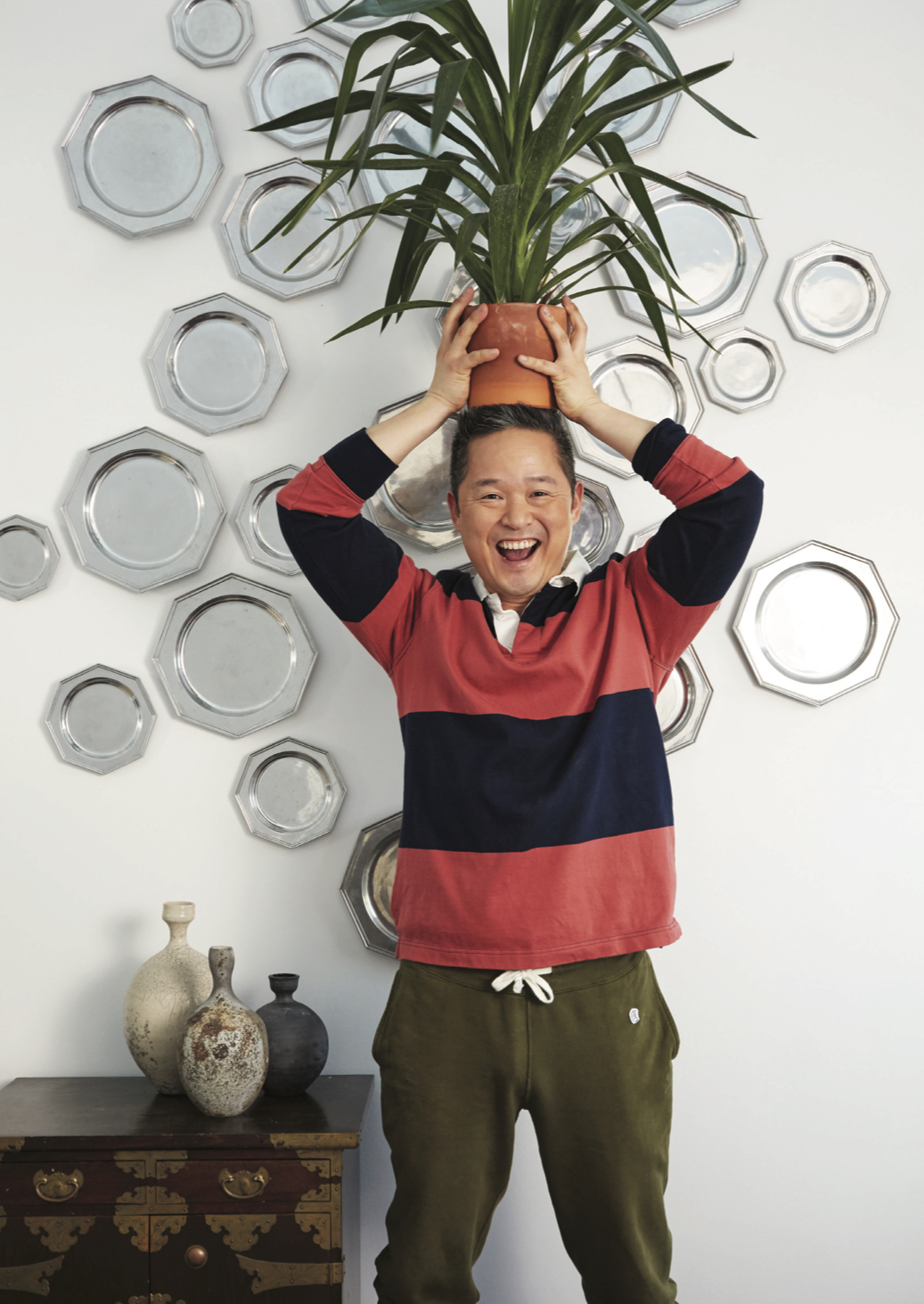 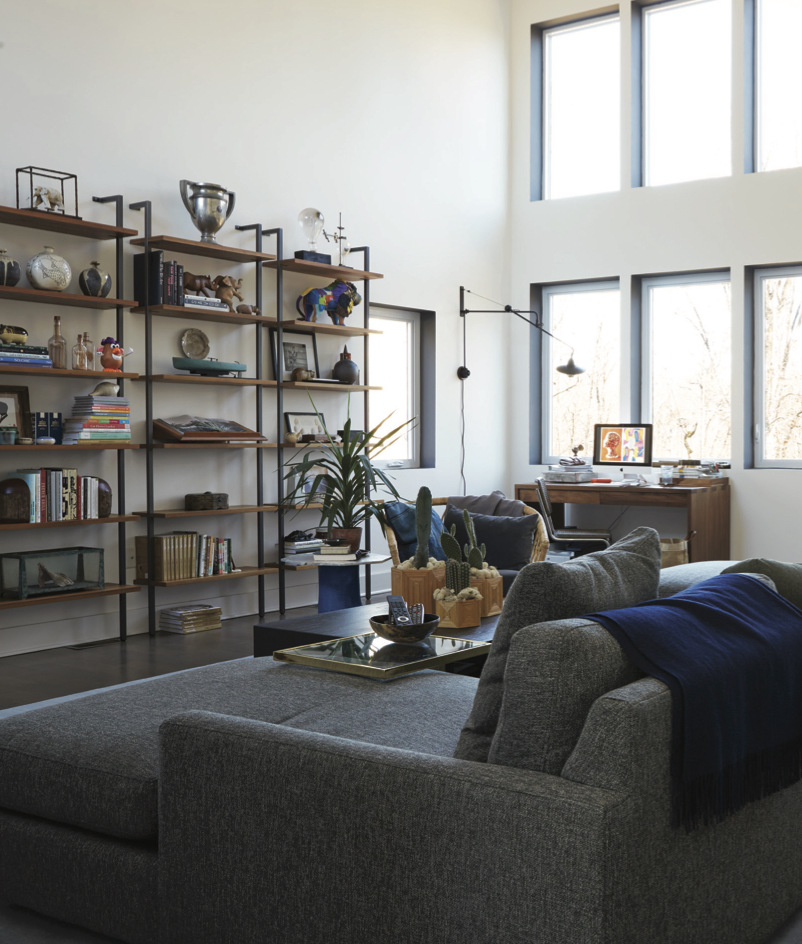 WHEN Danny Seo ordered a large sectional sofa from Room & Board for his new living room, he requested something unheard of in the company’s 39-year history. He got the sections upholstered in two different fabrics. “The delivery people almost boxed it up and sent it back,” Danny says with a laugh. “They thought it was a mistake.”

The effect is subtle and cozy—not words often applied to an oversize investment piece. Two tweed sections bookend a soft annel—a bit like a men’s suit, Danny says. To finish it off, a pair of old military duffels are stuffed to serve as bolsters. The seating is inviting and just a little bit weird. A word Danny embraces wholeheartedly.

“Every room should have something weird,” Danny says. “I didn’t want a home that felt like a museum or too precious. Weird is wonderful!!”

The home has a distinctly modern vibe, with clean lines and a totally open plan that wouldn’t look out of place in Architectural Digest. A glass table near the front door is centered under a stylish cubic chandelier—a housewarming gift from Mitchell Gold and Bob Williams. Take a second look though, and odd details pop up—the table holds a hunk of crystal and a natural sponge, cradling a dried up hornet’s nest Danny found exploring his nine forested acres in western New Jersey.

Weird, right? But actually, displayed that way, it’s easy to see the nest as a work of art—and maybe even covet one for your own home. As anyone who’s followed Danny’s career knows, his knack for turning trash into stylish treasure is legendary. As is the inspiration he draws from being outdoors.

Nature is a theme throughout his 3,000-square foot home—starting with the world outside. A dozen windows on the main floor pull in the surrounding fields and forest at every turn, and much of the décor includes natural elements, from cacti on the coffee table to the stones that form the centerpiece on his reclaimed-wood dining room table at the far end of the kitchen. “I have a problem with petrified wood and crystals,” Danny admits with a laugh, gesturing towards it.

Antlers serve as a natural anchor in the entry-way, an area Danny calls “The Store” because it’s the busiest part of his house. “It’s a random mix of everything,” he says, pointing out a plaster rhino head salvaged from a junk store in Seattle that hangs next to antlers draped with a beaded necklace. All of this fixed above an array of vases and trinkets lugged home from far-flung destinations or discovered in antique stores a few miles down the road. Danny’s mix of styles and periods all have just a single common thread—they caught his artistic eye.

Similarly, the tall bookshelves in his living room serve as road map to Danny’s travels and career, holding a collection of ceramic pigs that have followed him through three houses, along with cook-books, design tomes and a rock from the beaches outside of Malmö, Sweden.

“Ask me anything about anything in this room,” Danny says. “I have a house full of weird things that tell a story.” That beaded bracelet? Danny bought it off a Maasai tribesman—literally. The man had worn it so long they had to use lard to pry it from his wrist. A lion on the top shelf was another African score—it’s carved from old rubber flip-flops. “When I come home, these things remind me of every place I’ve been,” he says.

In the kitchen, even the dishes tell a tale. Dark Ann Sacks tile serves as the ideal backdrop for floating shelves stacked with tableware picked up all over the world—celadon coffee cups from South Korea, blown-glass tumblers from the artist Lynn Read of Vitreluxe, and tiffins from the streets of India.

While he isn’t Marie Kondo strict, Danny’s minimalist kitchen holds nothing but the essentials—he pulls open a couple of large storage drawers to show they are completely empty. And he swears his garage is basically empty as well.

“I don’t believe in storage,” he says. “If I’m not using it, I let it go.” Oftentimes, friends are the beneficiaries of his informal asceticism—he might drop in for a visit with a Ralph Lauren desk lamp that should be perfect on the host’s side table. No surprise to anyone familiar with his aesthetic, he’s usually right.

That said, Danny can come up with unusual uses for things, if he wants to hang onto them. The guest bedroom—anchored with a Room & Board bed with an organic mattress—is a case in point, where a pair of vintage leather and beadwork pants hangs on the wall, in a display that includes a silkscreen of a bowling shirt from The Big Lebowski, and a giant replica of a buffalo nickel.

The pants came from a store in nearby Lambertville, N.J. called America. “It’s my all-time favorite store,” Danny says. “It’s so perfectly curated that I want everything.”

Danny’s knack for repurposing, mixed with his eye for design, have certainly attracted attention and awards—he has the books, TV show, and this magazine to prove it. But Danny is self-effacing, insisting that he has no special skill—he says he assembles things that bring him joy, and they all just go together.

Eagle-eyed fans of Danny’s TV show may spot a few familiar items. He crafted the chopstick lampshade in the guest room for a segment, then strapped it into his passenger seat for the drive home from Serenbe, a sustainable community in Georgia where he shot season three.

For a multimedia mogul, Danny’s workspace is pretty unassuming—just
a small wood desk from Room & Board. (Sensing a theme? Danny loves the company, which focuses on solid wood furniture crafted in the U.S.) The desk is set against a wall in the open first floor space.

“Having a designated room for ‘work’ makes it feel isolated and almost like a punishment,” Danny says. “ ere’s something un-present about putting in endless hours in one room of a house when you can live in the whole house.”

Standing on the corner of his desk is a particularly hard-won paperweight—on a stack of magazines, in a tray he decorated for a TV segment using crushed old CDs—his 2018 Emmy for Outstanding Lifestyle Program. In a whirlwind last spring, Danny won the award while moving into the new home—and replaced its vinyl siding with James Hardie concrete composite to celebrate.

Want to create a space that reflects your life and aesthetic? Follow these simple rules.

#1 Design your entry as a VIP entrance to your home.

#2 Immediately reject anything that you don’t love.

#3 Don’t design rooms for their purpose. Your home should be a reflection of how you live – so go aheadand put your office in the living room.

#4 Make it 90 percent functional, 10 percent weird. You don’t want it to be more weird, because that’s … too weird.

#6 You can find someone to make pillows from just about anything.

#7 Store-bought isn’t bad if it resonates with you.

#8 It’s all about blending mass-produced pieces with personal touches, like a statement Room & Board couch with junk-store chairs.