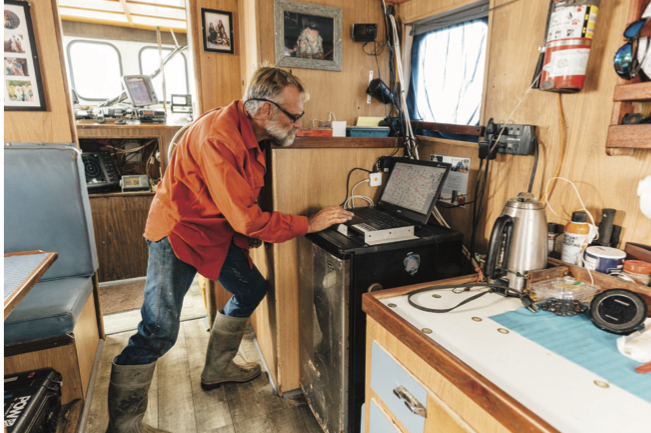 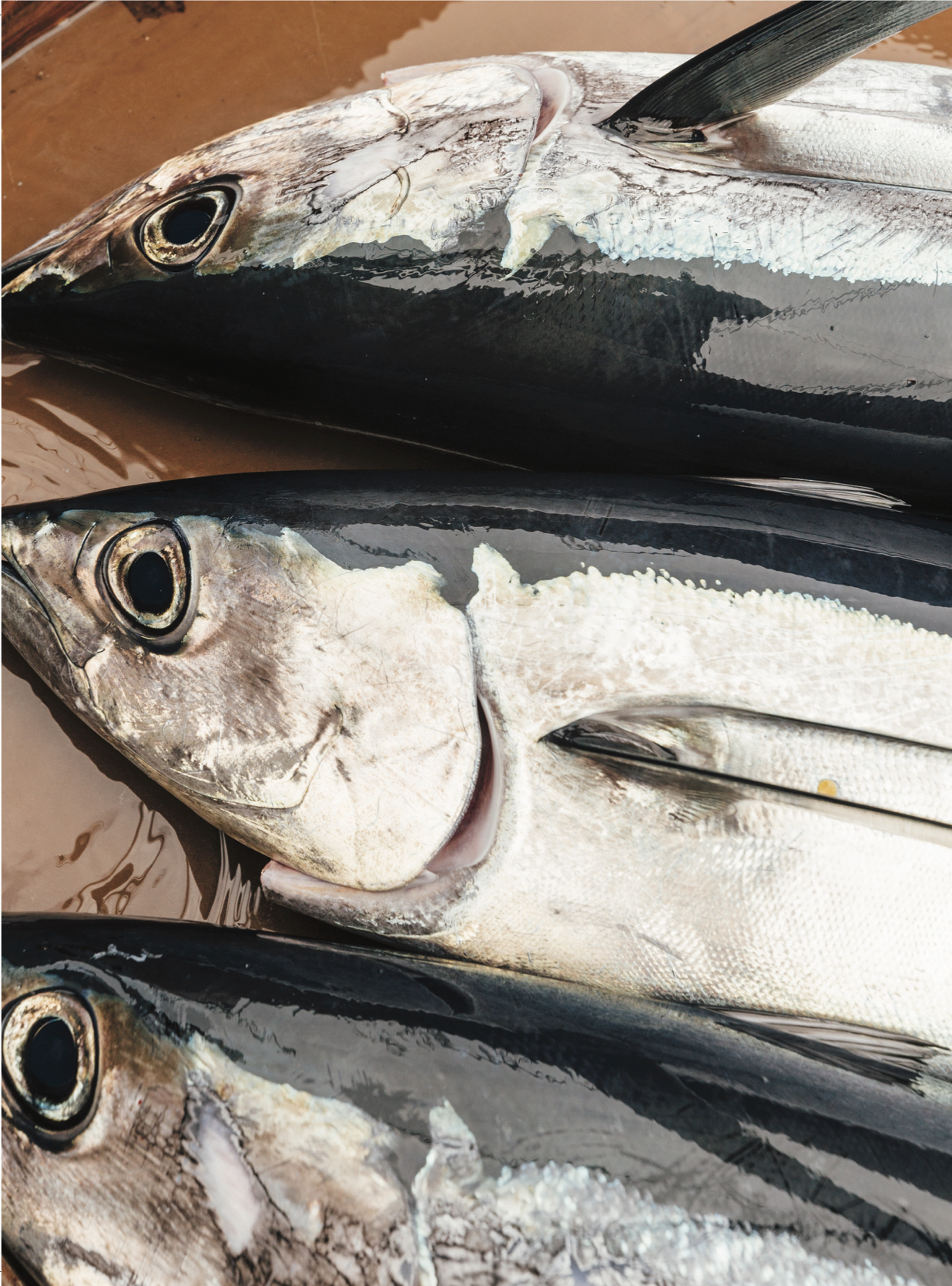 WHAT GOES INTO THAT CHEAP CAN OF GROCERY STORE TUNA IS DOWNRIGHT ALARMING.

Long fishing lines favored by the big tuna companies stretch more than one hundred miles, baited with thousands of hooks. As they drag through the ocean they snag tuna but also sharks, turtles, and hundreds of thousands of seabirds every year. Other boats drop “fish aggregation devices” or FADs— floats that encourage all kinds of sea life to form a mini-ecosystem in the middle of the ocean, enabling nets to scoop up fish faster than they are able to reproduce and trapping unwanted species as well.

“These methods are highly destructive for our oceans, and also destructive as a model for any company that wants to stay in business,” says David Pinsky, Senior Oceans Campaigner with the international environmental group Greenpeace USA, adding that, due to these aggressive means “we’re seeing significant declines in various stocks of tuna.”

That’s a big deal. In 2015, according to the National Fisheries Institute, Americans consumed more than 700 million pounds of canned tuna—about 2.2 pounds per person. Ensuring stocks remain plentiful to feed that big appetite for a healthy low-cost protein is starting to become important to major retailers as well as environmentalists.

None of this is news to Bill Carvalho, president of Wild Planet Foods. His company has been following strict sustainability methods for more than 15 years, after the California native slowly realized that the way the industry operated was not in line with his core values. “From 1990 on, I witnessed the disrespect that is shown to ocean species through harvest methods that are indiscriminate, non-selective, and result in egregious bycatch mortality and discard,” Carvalho says. “It really makes me sick to think that we humans can treat other life forms with such disregard and wanton disrespect for their right to live because our right to profit is greater.”

A 2001 visit to the Monterey Bay Aquarium, an organization that pioneered sustainable-fishing advocacy, spurred Carvalho to action. He immediately stopped selling products that were environmentally harmful and launched Wild Planet in 2004 to focus on only sustainably caught seafood. For tuna, that means pole-and-line caught or troll-caught. Pole-and-line is basically a high-tech rod and reel. Troll-caught means that many lines are tossed overboard at once, each with a single hook, and hauled up by a single worker. Both minimize bycatch—the trapping of unintended species.

“Earth in its wild state is its most productive state. The more humans tamper with that, the less usable the earth will really be to support life.” BILL CARVALHO, WILD PLANET FOODS

The early years tested his resolve. “For a while, it was a financial negative,” Carvalho recalls. “I didn’t start this because it was a good idea for business—it was actually a bad idea in the short term, because we discontinued profitable products in order to take our stand.”

Sticking to his values ultimately paid off—Wild Planet is now the fourth largest tuna company in the country, recently garnering its second award from Greenpeace that recognizes it as the most sustainable and ethical tuna brand in the country.

Wild Planet’s successful balancing act may be leading others to step on board. Greenpeace’s Pinsky notes that the organization’s most recent annual tuna brand survey found that 11 of 14 supermarket chains examined have at least one “more responsible” private label option. Contrast that with 2011, when Whole Foods was the only chain to reach that bar.

The world’s largest tuna company is feeling the heat too. Chicken of
the Sea parent company Thai Union recently announced an agreement with Greenpeace to invest $100 million in improvements to production meth-
ods over the next five years. Among its broad-reaching plans, Thai Union has agreed to reduce use of long lines and FADs, focus on worker protec-
tion issues, and commit to initiatives encompassing marine conservation and responsible sourcing and operations.

“This is simply the right thing to do to create healthy seas now and in the future,” says Kevin Bixler, Thai Union Global Director, Group Procurement. “We believe in doing business as a truly sustainable entity and the cost is simply a part of that mandate.”

Beyond the obvious benefit to sea life from large producers changing for the better, the shift should help small, family-owned vessels for whom the evolution of sustainable tuna has already been a much-needed lifeline. Wild Planet and others generally buy from individual boats, often run by families that have been fishing for generations. Such practices have helped to stabilize the market for West Coast communities, says Wayne Heikkila, Executive Director of the Western Fishboat Owners Association, a non-profit representing hook-and-line albacore vessel owners. “Having access to high-end markets has increased the base price [per pound] for our members,” Heikkila says. Previously their catch, which is on the Monterey Bay Aquarium’s “Green List” of sustainability and good fishing practices, would be sold to the larger canners and lumped in with less responsible options. Working with small U.S. vessels and paying a living wage is one reason products like Wild Planet are more expensive—two to three times more per can, in most instances, than less sustainable options.

However, consumers are not only paying up for sustainable tuna that benefits sea life and working fishing families, it’s also tastier and healthier. To package their fish, conventional tuna brands will first cook whole fish in vast, room-sized ovens, making the meat easier to remove from the bones. But that practice leaves behind the drippings—filled with flavor and Omega-3s—on the floor. The fish is then cooked a second time in the can with added water or oil, meaning what’s in the can isn’t all ounces of tuna.

In contrast, Wild Planet is among the small producers who clean and can the fish raw, then cook it once, retaining all those health and flavor-boosting fatty acids. The end result is moist and flavorful. “That’s the Omega-3 blast tuna is supposed to have,” Carvalho says.

Cooking methods aside, Carvalho is happy to see more canners coming around to his point of view. “We can’t keep domesticating the land and the wild ocean resources, creating bigger and bigger farms that encroach upon the wildness of the earth,” he says. “Earth in its wild state is its most produc- tive state. The more humans tamper with that, the less usable the earth will really be to support life.”