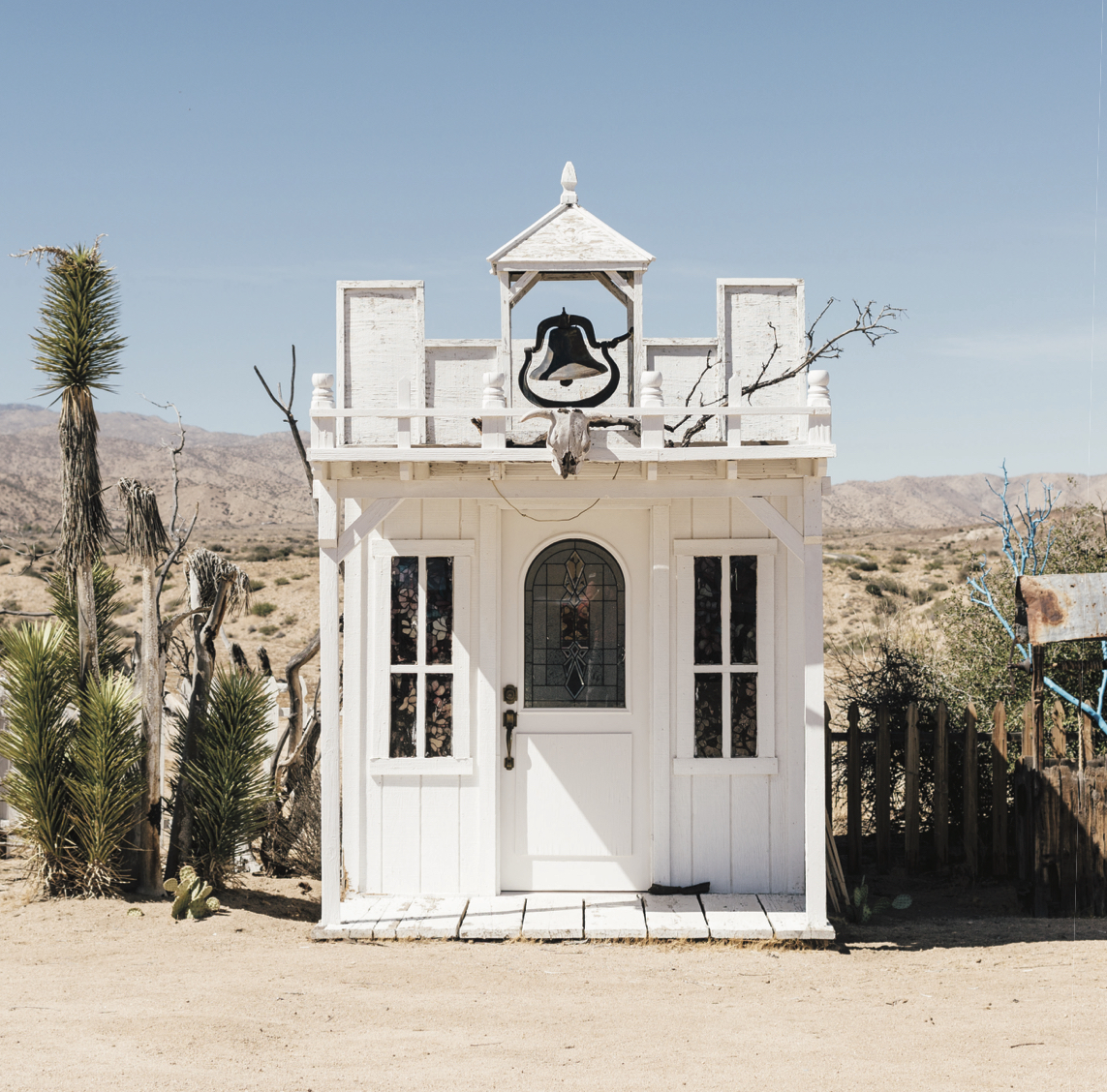 A LONG JOURNEY from Fifth Avenue to Pioneertown—some might say light years. But when longtime New Yorkers Hugh Glenn and Yves Kamioner discovered the high-desert town (population 500), they were captivated by the natural beauty of its surroundings— and its quite unnatural history.

Though the old-timey buildings along “Mane Street”—including the requisite bank, jail and saloon—suggest otherwise, no actual pioneers rolled up in covered wagons to stake a claim to this plot of land in California’s Mojave Desert. In reality, the town was dreamed up by some big-name Hollywood cowboys, such as Roy Rogers and his backup band, The Sons of the Pioneers, (after which the town was named). They all ponied up to build it in 1946 as both a film set and party spot, one that would get them out of LA to a more kicked-back scene. But not too far out—a fast car will get you there in two hours.

It’s remained relatively untouched since Roy and Trigger galloped down the center of town. The buildings aren’t just fool-the-eye facades; they’re real structures and now occupied by potters, saddle makers and the like. A big draw for tourists is still the town’s weekend shoot-‘em-up reenactment.

Music is also part of the vibe. The original roadhouse, Pappy & Harriet’s, has its own following. It can still get to thumpin’ on the weekends, sometimes with big-draw performers like Lucinda Williams, Robert Plant, and even a recent pop-up concert by Sir Paul McCartney. A state-of-the-art recording studio attracts more prominent players in the music scene—much for the same reason Roy and Gene Autry and others ambled out—to escape the chaos of the city and create. This mystical, magical mix of cowboy and creative cultures, plus the stark beauty of the countryside, is what drew Hugh and Yves to this high-desert oasis.

The two had a house in Palm Springs for a few years before a friend took them on the 20-mile drive to Pioneertown. Yves, a Belgian jewelry designer, was instantly hooked. “I was totally seduced by the beauty of the desert,” he says. “There was something about it. For me, as an artist, I believe the desert is a blank page that gives me permission to self-reflect and also to be free and play.” Hugh, a retired jewelry executive, also had a visceral reaction: “I grew up in Texas where there is a lot of land…and hence my fascination with big open land. It doesn’t take long at all to appreciate a sunset here—and then there are all those the stars.”

So when a 19-acre ranch—complete with movie set remnants such as an old train car, general store, and tiny church—came up for grabs, they did just that a couple of years ago. Immediately, they saw the possibilities of the cowboy compound, not just as a getaway for themselves, but to host small corporate and private retreats, which they now do, calling it the Stargazing Desert Retreat. “What we really wanted to do was to share with others the transformation we felt discovering the desert,” Yves says.

First, they had a little transforming of the property to do—starting with the 20-year-old house. “It was pretty bad,” according to Yves. “It looked like a Connecticut fake-Federal, pale blue house with lots of Victorian moldings, and it made absolutely no sense. But it was also a big bag full of goodies with the memorabilia and artifacts. I went every day and stood in the middle of all these things and I thought—what am I going to do with this?”

What they did was rearrange buildings into a more aesthetic and accessible whole, and revamp the 1,300-square-foot residence into a 3,200-square-foot modern ranch house with expansive windows that would scoop up the 30-mile vistas—and maybe offer skittish city folk a perch to enjoy the scenery minus the rattlesnakes, at least until they adjusted to the sheer vastness of the place.

“I don’t mind telling you that many, many of our friends thought we were crazy when they first saw it. but they get it now.” —HUGH GLENN

Inside, Yves plied his artistry, assembling all the ranch’s treasures into fascinating and decidedly un-museum-like interiors that, like the town itself, are a little bit country western and a little bit rock ‘n’ roll. The walls display movie stills and music posters. An eclectic mix of furniture—Roy Rogers meets Mick Jagger, with a little Fred Flintstone on the side, according to Yves—is gathered from Palm Springs thrift stores and New York antiques shops, and the property itself. And crowning it all are show-stopping lighting fixtures Yves created from the flotsam jetsam he found while poking around the place, rounding up everything from lassos
to branches to wagon wheels. “It was a challenge to put all these pieces together,” he says. “I wanted to tell a story—and provoke an emotion. Really, I had no other plan but to create a place where people can play.”

“ At first, there is really nothing in the desert to grab that is familiar. So it forces you to slow down and look at yourself. The stars are another lesson in humility.”—YVES KAMIONER

Play for sure, but play quietly. The partners are keenly aware of what the neighbors would think if the intimate events they envision become large tented affairs that swamp the town. But that’s not the hand they want to play anyway. “What we really love is being able to preserve the feeling of this place,” Hugh says. “So whatever we do has got to be good for everyone—that’s my motto. I certainly don’t want to be the big ol’ New Yorker coming in to take over the town. But they seem to be happy with the results.”