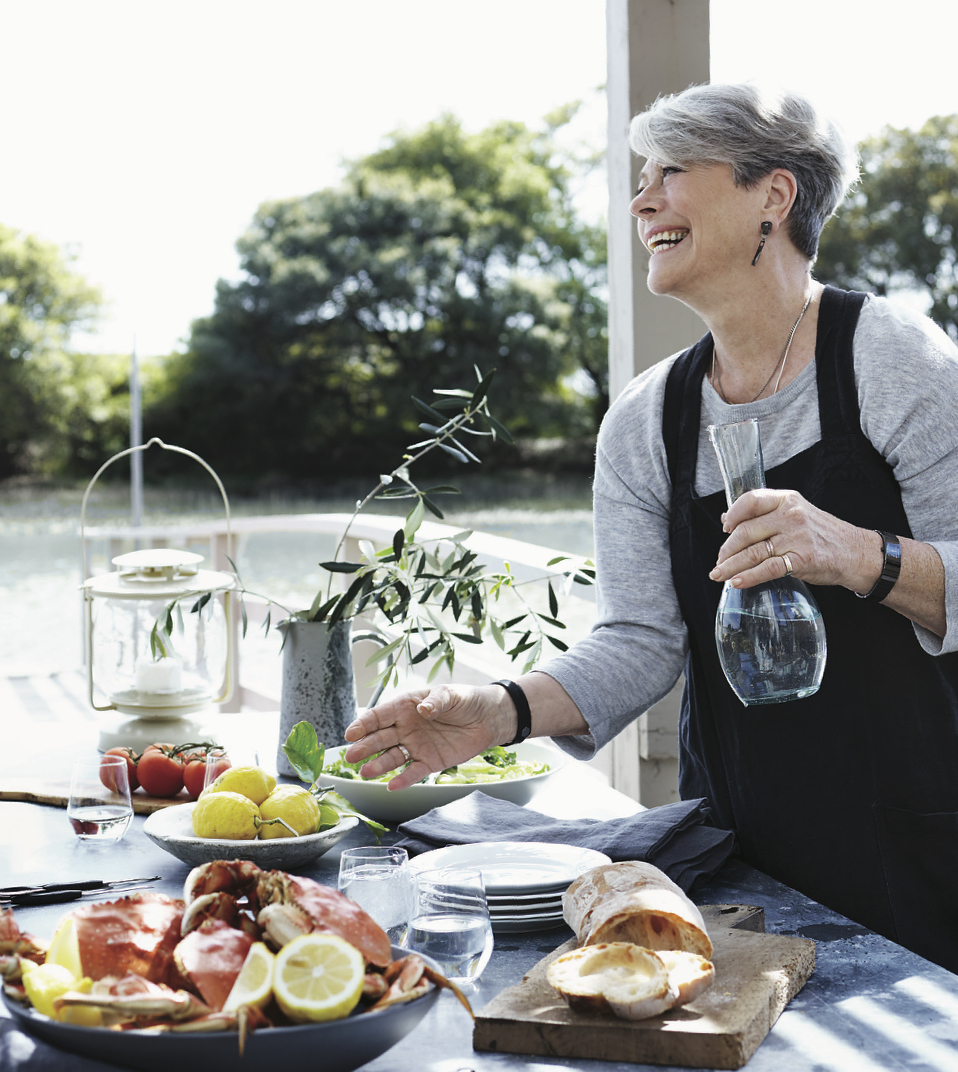 Nine years ago, at the age of 62, Tricia Rose didn’t set out to start a cottage industry. Sure, she had the cottage—this 1,700-square-foot former duck-hunting cabin that hangs out over San Francisco’s North Bay. And she’s certainly industrious—evidenced by her tricked-out carpenter’s workshop, converted from the boathouse, where she crafts her own furniture. But she was happily working with her husband Stefan Sargent, producing documentary and corporate films as they’d done for many years without a thought to altering course.

Until a small hunk of humble fabric changed all that. While clearing out her grandmother’s home she uncovered a pillowslip of homespun linen. “It was grown, harvested, spun and woven into linen by my great-grandmother around the 1840s,” says Tricia, who was born in England. “That was common in the 1800s in rural Europe…one had a field of flax that was used to make linen.”

She coveted the piece for its connection to her family and the land they lived on, but Tricia was also impressed with the fabric’s durability. “I just happened across this beautiful material that had served my family for decades,” she says. “And this little thing sparked my love a air with linen.”

Years later, she also happened across a fabric that had the same loose woven, “peasanty” feel to it that she traced to a company in Belarus. She made a duvet for herself that attracted so much attention from her friends, she began to think she could sell a few. She took a picture of it, wrote a little press release, sent it to a couple of home blogs, and before long she was washing, cutting, and stitching the linen into duvets at her dining room table for a growing fan base. Rough Linen was born. Today she sells all manner of bed dressings, plus table linens, curtains and some wearable items through a website that Stefan and their two computer-programmer sons created for her “that’s better than I deserve,” she says. A few years ago she moved her operation from her home to a nearby workshop where about a dozen women help her keep up with demand that has grown as naturally as the textile itself—with no advertising but lots of social-media buzz and word-of-mouth referrals.

“I don’t like fuss and I don’t like a lot of choices. I wanted this place to feel like what it is: a simple little cabin. It shouldn’t have terribly fancy stuff. That’s the pleasure of it.”

She’s not surprised about Rough Linen’s success. To Tricia, the fabric is an easy sell. “What appealed to me is what appeals to others—the honesty of it,” says Tricia. Though there were other companies making linen products, what set Rough Linen apart was the fact that Tricia sources high quality, traditionally woven linen and then simply lets it be. “Linen tended to be sold as a very smooth, fine fabric,” she says. “But to me, the roughness is part of the appeal. I like it mussed. I’m not fool enough to iron a sheet. Who wants to buy something you have to look after? I want my stuff to look after me.”

For the first three years, in fact, Tricia spent much of her time convincing people they didn’t need to iron linen. “It’s such an evocative fabric in its natural state,” she says. “It’s how it catches the light…you see the shadows and that gives it a depth. is is really the essence of its beauty—it’s sort of
a humble, intrinsic, unshowy beauty. Like other elemental, natural materials—wood or pottery—to me it’s at its best when it’s just itself.”

The same could be said of the interior of her Marin cottage, where she’s created a living space that is of a piece with its surroundings, primarily because pieces of its surroundings populate the place. “When I go for a walk more often than not I’m dragging back some piece of driftwood or something,” she says. “I haven’t got a style, I feel that what attracted me to the house dictates that. Everything that’s here—the floats, the bits of rope, the crab nets—are things that I’ve picked up from the shore or that people have given me. I don’t have collections, I pick up things like a magpie. But I’m very good about discarding them as well—throwing them out or giving them away. If something starts to fuss me, I get rid of it.”

The cottage had drifted far from its original state when Stefan and Tricia purchased it in 2002. Think popcorn ceilings, fake plaster walls and “condo carpeting.” Now the place is allowed to breathe, with simple furnishings, white walls, pale wood floors, sentimental pieces—such as the many maps that mark her previous homes as well as those of her ancestors—plus the flotsam and jetsam that catches her eye. And, of course, layers of linen. “It’s a very personal house,” Tricia says, “but it represents the fun of being a grown-up. I can do what I like here. If I want to have little odds and ends of rope hanging around because I love the color of it, then why shouldn’t I?”

Indeed, why shouldn’t any of us?

Tricia’s secrets for linens that are no fuss, but with a little muss.

▪ Do up any buttons or zippers.

▪ Machine wash with a mild detergent. I use cold water to
be energy efficient but it is safe to boil-wash linen. I use Linen Wash from Le Blanc in Portfolio, Nancy Boys laundry powder, or Mrs. Meyer’s Clean Day (lavender scent).

▪ Never use bleach (not even on white linen).

▪ Avoid fabric softeners. They were invented for synthetic fabrics but are not needed for natural fibers, and are actively unhealthy. The plasticizers they contain can gum up fibers and dryer filters alike.

▪ In a dryer, use a medium setting, dry the linen by itself and don’t dry completely.

▪ Shake out the fabric while still damp and lay it flat. It will,
by nature, have a soft, complex texture.

▪ If you accidentally overheat, crowd or over dry your linen and it becomes wrinkled, dampen it and the wrinkles will relax.