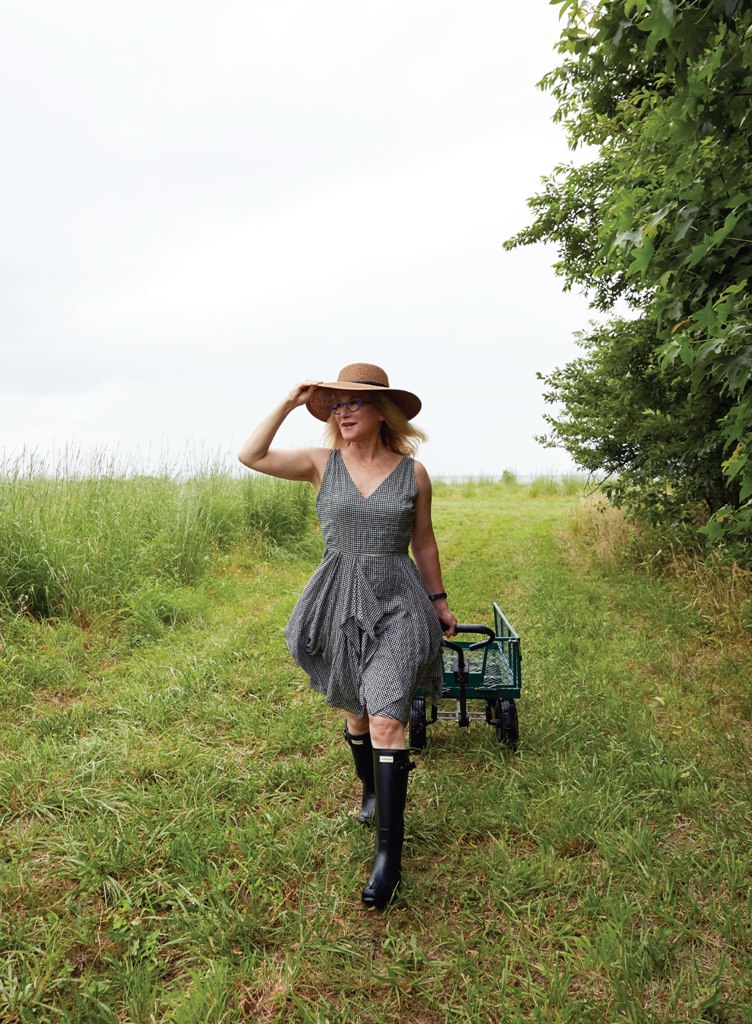 KARA BROOK FIGURES she’s on her fourth career. She started in the advertising field, until she “aged out.” Next she built her own web content management business, until she “burned out.” At that point, she fulfilled a promise to herself that she would become a fulltime artist. And that’s when she became super stuck on bees. The artist became enthralled with encaustic painting, an ancient technique that mixes pigment with hot beeswax to create textural works of art. Then, a botch in her studio redirected her passion. “One day, I wasn’t paying attention and boiled a big, huge pot of wax,” she says. “Once you boil it, it’s useless. I was angry at myself for wasting supplies, but I was also thinking, gosh, how can I get my own wax. And then I thought, I know, I’ll become a beekeeper.”

She ordered a hive online, along with some books on beekeeping. “My husband asked if I knew what I was doing,” she says. “And I said, ‘No, but I bought some books and I’ll just follow them.’” Was she scared? “Oh, I was definitely afraid,” she says. “But I pretended I wasn’t and eventually my fear subsided.” Was she stung? “Multiple times,” she says. “Once when I wasn’t dressed properly I had an entire hive of bees fly up my pant legs, stinging away endlessly. I had swollen legs for a week.”

But she pressed on bravely. One hive became 15. And her study, including hands-on instruction with a beekeeper friend who took her under his wing, led her to another passion—educating people on the importance of bees. One-third of the foods we consume are dependent on these hardworking pollinators, and the growth of GMOs and pesticide use has caused their populations to dwindle. If hives collapse, so do our food systems.

Conservation is something the yogi and longtime gardener had long been tuned into. “The whole idea of loving Mother Earth was imbued into me as a child of the seventies,” she says. “I have a lot of teachers to be thankful to for that.”

Kara was able to cultivate that knowledge when, about a decade ago, her husband, Howard Brown, turned over the management of their 100-acre Chesterhaven Beach Farm to her. “It was all corn,” she says. “My husband thought, like so many others, that when you have a farm you grow corn. And I understand the need for cash crops, but there are so many other things you can plant that are good for the earth.”

It took several years to revive the nitrogen-depleted land of the farm—which butts up to the Chesapeake Bay on Maryland’s Eastern Shore—into a fertile haven for bees and other winged creatures. Five traditional farmers quit on her before she found consulting ecologist Jeff Wolinski. “He knows everything about plants,” she says. “I don’t even pretend, I just ask him what to do.” But now Kara can walk through fields lush with nectar-laden plants such as clover, bergamot, sunflowers, and fruit trees to get to her healthy hives. Ultimately, that passion for both greener pastures and beekeeping cross-pollinated into her small-batch business.

It started with the honey itself, which she shared with friends and family—to their delight. Pure, natural honey takes on the flavor of the land, and is a far cry from what is squeezed from the plastic bear-shaped bottles on most grocery store shelves. Her friends encouraged her to start her own label.

She did, tapping experts to help her create beautiful, eye-catching (and recycled) packaging. She decided lollipops would be a tasty addition to the line. When Cooking Light magazine discovered and featured her goods, she was off and running. Lip balm came next, and that’s when the biz really took flight. “It was just me and the bees when the phone rang and it was Anthropologie calling,” she says. “At first I thought it was my sister playing a joke on me. But it was for real. And I thought, okay, let me figure out how to do this.”

Fast-forward five years and her line has now grown to dozens of natural products, including pure soy and honey candles, body butters and scrubs, honey soaps, and natural deodorants. She sells her goods online and out of her Honey House facility in Owings Mills, Maryland, which includes a retail shop and a commercial laboratory where products are tested and packaged. Her line has now been picked up by over 250 specialty shops and spas. Other big retailers, such as West Elm and UncommonGoods, have also caught the buzz.

Though some of her honey comes straight from her hives, even her busy bees can’t keep up with demand (she might pull 80 gallons per year from semiannual harvests, leaving 100 gallons to nourish the hives). She’s built her own colony of suppliers from other regional beekeepers. And she relies on cosmetic-grade dried organic honey to make her beauty products safely.

But Kara is content to keep a lid on growth. “We are happily small batch,” she says. “We make like 80 jars of butter at a time. The most scrub we’ve made was just in June, when we made 2000 ounces. We start early in the morning and then in the afternoon, somewhere around three o’clock, everyone—even our bookkeeper—suits up in head covers, gloves, lab coats and we all bottle. It’s really a beautiful sight.”

The demand for honey-based products will undoubtedly grow. Research—and thousands of years of history—has shown it to be a super substance. Kara can click off a few of the reasons you want to smear it all over your biscuit—and your body. “It has lots of micronutrients from plants,” she says, “that are nourishing to your gut and also nourishing to your skin. It’s a humectant. It is antiseptic. It’s good for inflammation. The University of Maryland did a study on wound care and they found the best results with honey.”

Next up for Kara, creating completely plant-based products (she’s working with a French chemist on that one) and increasing her use of organics (something that’s difficult when using U.S. sources of honey, including her own, because the country lost its designation due to big-agriculture practices). She’ll continue to spread the word about protecting bees, and wants to convert more land to buzzing meadows and woods. And she wants to write a book that will inspire burned out women of a certain age to follow their bliss right into successful businesses. Obviously, she’s the ultimate busy bee. “I go hard at everything,” Kara says. “How else do you do it? When opportunity knocks I can’t bear not to rise to the occasion.”

Kara’s tips for cultivating your own small-batch biz.

DECIDE if your passion project will be a hobby or a side business. Hobbies cost you money. Businesses start with a fl exible plan to eventually profit.

SEEK OUT good advisors and consultants. It takes a colony.

TRADEMARK your company name and product name right away (this will also ensure that you’re not infringing on someone else’s mark). Protect your intellectual property if you are making proprietary products of any nature.

BE READY for a long ride. Nothing happens overnight in any business. Get-rich quick schemes are for scammers.

KEEP YOUR DAY JOB and pursue your idea on the side, in the evenings and on weekends, so that you can get a feel for what it really entails. It’s never what you think so go slowly.

PREPARE for mistakes and failures along the way. Pick yourself up, dust yourself off, and try again.